Songwriters in the Round Thursday 11th June @ Hole in the Wall 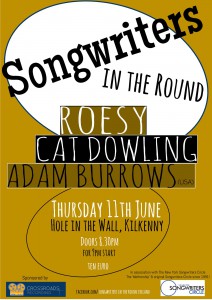 Singer-songwriter and artist Roesy may now live in Melbourne Australia, but his journey began in Birr, Ireland singing along to his father’s records as a boy. In 1996 Roesy signed to Warner Chappell. Under the mentorship of ex-Suede guitarist Bernard Butler he recorded and released his first album Sketch the Day, Paint the Night in 2001. His next two albums The Spirit Store and Only Love is Real were self-produced and released in 2003/2004. These albums led to nominations for Best New Irish Act in Ireland’s 2004 Meteor Awards and in the Traditional/Folk category of the 2005 Hot Press Music Awards. Roesy has just come off touring Australia with Joan As Policewoman and is back in the studio writing and recording his 7th album ‘Wolf Counsel’ with producer Mark Stanley (Glen Hansard, John Murry, Gemma Hayes)

Acclaimed Irish singer, songwriter and performer Cat Dowling writes beautifully dark pop songs and her voice has been lauded as one of the most wonderful and evocative in Irish contemporary music. Her husky and achingly intimate vocals will draw you in from the outset. Dowling has played and fronted numerous music projects, the most recent act was Babelfish, which quickly morphed into the more successful electro/dream-pop band, Alphastates. The latter released two critically praised albums “Made From Sand” (2004) and “Human Nature” (2009) before splitting up in 2010 as Dowling had the need to record an album following her own lead. Songs from her 2015 debut solo album The Believer has featured on Witches of East End (with Julia Ormonde) as well as the groundbreaking second series of Cinemax’s Banshee in the US. Cat Dowling is currently putting the finishing touches to her follow up album “Is this Love” which will be released in early 2016.

Adam Burrows is from Nashville, Tennessee. He creates folk music that invites the listener to pay attention to the beauty found in everyday life. His songs are reminiscent of easy conversation and draw the listener in by celebrating simple moments and embracing those moments that are fleeting. His album Forward was released in 2014, following Tall Tales and Never One for Silence. He spent last year touring extensively, including as a support artist for Australian singer/songwriter, Stu Larsen. His influences include Loudon Wainwright III, Bruce Springsteen, John Prine, Paul Simon and Bob Dylan.
Join Songwriters in the Round’s very special guests and host Martin Bridgeman on Thursday 11th June at Hole in the Wall, High Street, Kilkenny. Doors open at 8.30pm for a 9pm start. Tickets are 10 Euro on the door.