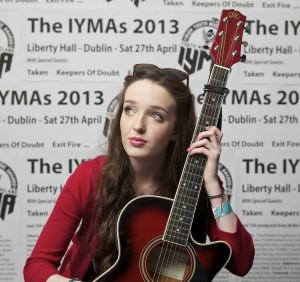 The Irish Youth Music Awards announces the release of 6 Singles from 6 young acts on the 6th December.

On the 6th December, 6 singles will be released from the 6th Album from the Irish Youth Music Awards Programme.

All recordings are entirely the work of young musicians aged 12 – 19 who took part in The Irish Youth Music Awards 2013, which is now the fastest growing programme for young musicians that Ireland has ever seen.

Youth Work Ireland’s exciting programme literally builds mini ‘Record Companies’ throughout the island of Ireland, North and South. These mini record companies are staffed entirely by the teens, engaging the skills and talents of real life Music Industry Executives and personalities to work alongside them.

The entire programme puts focus on educational and fun aspects of any potential future career, setting them up for work in almost any arena, not just music.

Now heading into it’s astonishing 7th Year, The Irish Youth Music Awards is once again calling for any young participants who would like to take part to visit their local Youth Work Ireland Youth Club or office and simply ask can they join up.

The Irish Youth Music Awards is supported by IMRO, IRMA, RAAP and Hot Press Magazine, and the full album ‘KIDS A – IYMAs Volume 6 – Meath’ is scheduled for a January 2014 release.

Meanwhile excitement is rising to fever pitch in Navan as all 6 acts are set to launch their singles with a live launch at Navan Shopping Centre at 5pm – 6.30pm

One of the tracks, Niamh Crowther’s ‘Bullets’ has already received airplay on several radio stations, including Single Of The Week on 4FM.

The 6 acts go ‘live’ on iTunes and all online outlets at 12 midnight on 5th – 6th December!

For more information on The Irish Youth Music Awards (IYMAs) go to http://www.youthworkireland.ie/what-we-do/iyma or http://www.garageland.ie/iymas.html