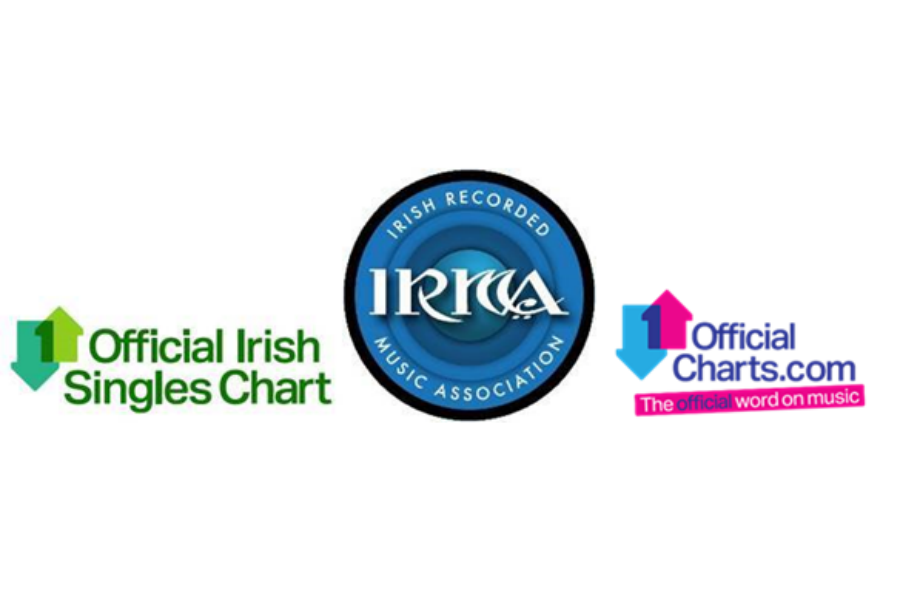 The Official Irish Singles Chart is set for a makeover this summer, as Irish fans’ consumption of music videos counts towards the weekly rundown for the first time, while the charts get a revamped new look and added brand reach, through an IRMA partnership with the Official Charts Company and consumer platform OfficialCharts.com.

Video enters the Official Irish Singles Chart for the first time
Streaming and downloading of videos from artists ranging from Picture This to Dua Lipa, Imelda May to Drake, Kodaline and Ariana Grande will begin to count towards Ireland’s official singles countdown, which is compiled by the Official Charts Company and unveiled every Friday.

The change is one of a string of adjustments to the Irish Singles Chart, that have been developed in conjunction with the Irish music industry. The addition of video comes as established audio services such as Apple Music and Spotify add video to their offer and YouTube launch their first subscription service in Ireland, signalling a key moment in the development of the premium music video sector. The first chart to include video will be counted down and published on 6 July 2018.

The change is designed to ensure the chart remains a showcase for hit music, however music fans choose to access it. The Official Irish Singles Chart will continue to be the most comprehensive countdown in the Irish market, reflecting sales of downloads, CD and vinyl, as well as streams of audio tracks or video tracks, whether on premium subscription or ad-funded services.

The services which will contribute video streams will include YouTube, Apple Music, Spotify and Tidal, who have all added videos to their platform over the past year. New services offering official video streams – such as the YouTube Music subscription service which launched on Monday (June 18th) – will also be allowed to report from launch.

The Irish Charts have not only had a methodology makeover, but a fresh look is also unveiled today as the first glimpse of a new brand partnership brokered between the Irish Recorded Music Association (IRMA) and chart specialists the Official Charts Company. IRMA has joined forces with successful consumer digital platform OfficialCharts.com to rebrand the Irish Charts and boost promotion of the Irish music market.

OfficialCharts.com already reaches 2 million users monthly around the globe, the collaboration will see Official Charts creating and managing a dedicated online hub – www.officialcharts.com/Ireland  – and new @IrishCharts social channels on Twitter and Facebook. These new channels will showcase exclusive editorial content tracking the weekly Irish Chart race, interviews with both homegrown and international acts who are making an impact in Ireland, as well as shining a spotlight on rising Irish talent, news and competitions. Users can also access the weekly Irish Singles Chart, Albums Chart, and Compilations Chart. Further exciting brand developments are in the pipeline to roll out later in the year.

“This is an incredibly exciting moment for the Irish Charts, the addition of video will ensure Ireland is keeping pace with today’s rapidly evolving music landscape. With new major digital services launching, video arriving on audio streaming platforms, and of course, the continued resurgence of vinyl, never before has there been more ways for Irish fans to enjoy their favourite music, whenever and however they want. It’s important that all this activity is captured and reflected in the nation’s official singles countdown, making it more insightful and relevant than ever. Plus, the fresh new look and visibility we are bringing to the Irish Charts and Irish music scene through our brand partnership with Official Charts and OfficialCharts.com is just the beginning of where we want to take this next.”

Picture This, the County Kildare duo whose self-titled debut album was the best-selling Irish album of 2017 comment: “We love shooting our own videos and it is such a fun way of expressing our music. For that to now count towards the Official Irish Singles Chart is amazing for Irish acts.”

Kodaline, whose first two albums hit Number 1 and achieved multi-platinum sales in Ireland comment: “We’re excited to see these new changes to the charts, particularly the introduction of video streams. We also think it’s going to be a great opportunity for new Irish bands and artists to make their mark in the charts”.

In parallel with the inclusion of video data into the chart, a handful of additional tweaks will be made to Irish chart rules. The combination of these changes will mean the chart continues to reflect how fans are committing to and engaging with music in an increasingly streaming-led world, as well as highlighting the fresh new hits coming through.  These changes include:

> Paid-for streams to be given greater weight in the new chart, than “free” (ad-funded) streams.
Free ad-funded streams will be weighted at a different rate in the Official Irish Singles Chart compared to streams played under a paid-for subscription from the July 6 chart. 100 streams via a subscription service will equate to one sale, as will 600 “free” streams. This replaces the current combined conversion rate where all streams are treated equally – with one sale equivalent to 100 streams. This will apply to both video and audio streams equally.

> Three-track cap – no more than the 3 most popular tracks (based on sales & streams) per artist in the Top 100.  Designed to prevent album tracks from popular artists taking up multiple positions in the Irish Singles Chart and so making it harder for new artists to feature in the chart. It minimises double-counting of album tracks between the Singles and Albums Charts and makes the two charts more distinct.

> New streaming ratio will come into play for tracks which are well past their peak and in steep, prolonged decline. The new ratio at the very earliest, kicks in from the 10th week on the chart if a track has been declining for almost a month. This serves to recognise the distinction between a single’s natural shelf life and the stretched out “long tail” of streaming as a form of consumption.