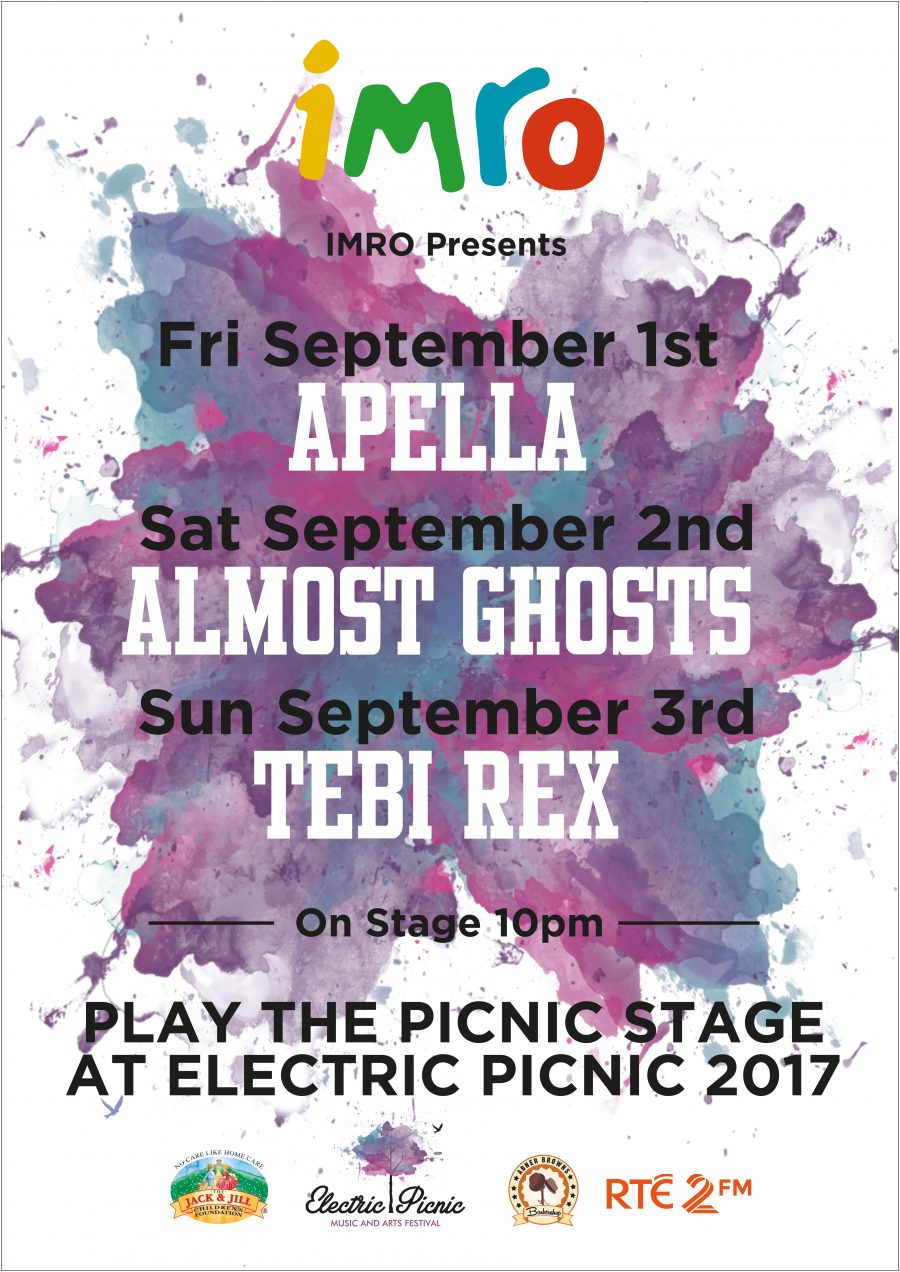 Festival Republic, in its on-going support of local Irish music is introducing a new stage to Electric Picnic, 1-3rd September 2017. The “Play the Picnic” stage is the newest addition to the ever growing festival. The stage is dedicated to bringing the best in local home grown Irish acts to the forefront of Irish music. The line-up is programmed by some of the key players in the Irish music scene, IMRO (Irish Music Rights Organisation) RTÉ2FM, RTÉ 2XM’s King Kong Radio, Abner Browns, Keiron Black and Music Maker. The charity partner this year is the Jack and Jill Foundation.

FRIDAY night will be curated by the King Kong Radio show on RTE 2xm. The KKR has been broadcasting for the past 8 years. It brings the newest in Irish music, fusing the radio show with interesting and curious interviews and special editions all based around what is happening in Irish music. The show will be hosted by Keiron Black, the voice behind the ever popular radio show. The Friday night will be a mixed tape of some of the coolest up and coming acts around : Heroes in Hiding, Munky, Roisin El Cherif, Hatchlings, Chancer, Cranky Face, Kevyn and APELLA.

SATURDAY will be hosted and curated by Abner Browns. Dave Judge and his crew have put together some of the biggest names in music onto one stage, for one day/night only! Acts such as Roisin O will bring a new wave of authenticity to Irish music. Abner Brown’s barber shop was nominated as one of the best venues in Ireland by the IMRO venue awards. It is quirky, cool and just enough to the left, it always feels right. The line-up includes: Roisin O, Chasing Abbey , Ivy Nations, Brave Giant, Military Road,Wolff, David Keenan, Marcas Carcas & the Trail Gang, The Skatuesques, Curtis Walsh and Almost Ghosts.

SUNDAY over to the good guys at Musicmaker on Dublin’s Exchequer Street who have been supporting the local music scene since 1980, so it seems only fitting that they host their very own night at the Electric Picnic. This year they bring their music-store mixtape to life through their own staff picks. You can look forward to some really big surprises on their stage on Sunday. A pretty epic way to bring the curtain down on EP17 with: Synk, Akora, Tayne, Little One, The Scratch, For Foresters, Tebi Rex & Very Special Guests.

The concept of an all locals stage is brought to you by LAB Productions, which are some of the key players behind the Oxjam stage over the last 3 years.

Sponsor IMRO have chosen their top three bands who they think represent the best in Irish music, each of these acts will take to the stage at 10pm over the three nights: APELLA will perform Friday, Almost Ghosts on Saturday and Tebi Rex on Sunday.

And later this week, Friday 28th July, RTÉ 2FM will announce the winning ten acts that will Play the Picnic.