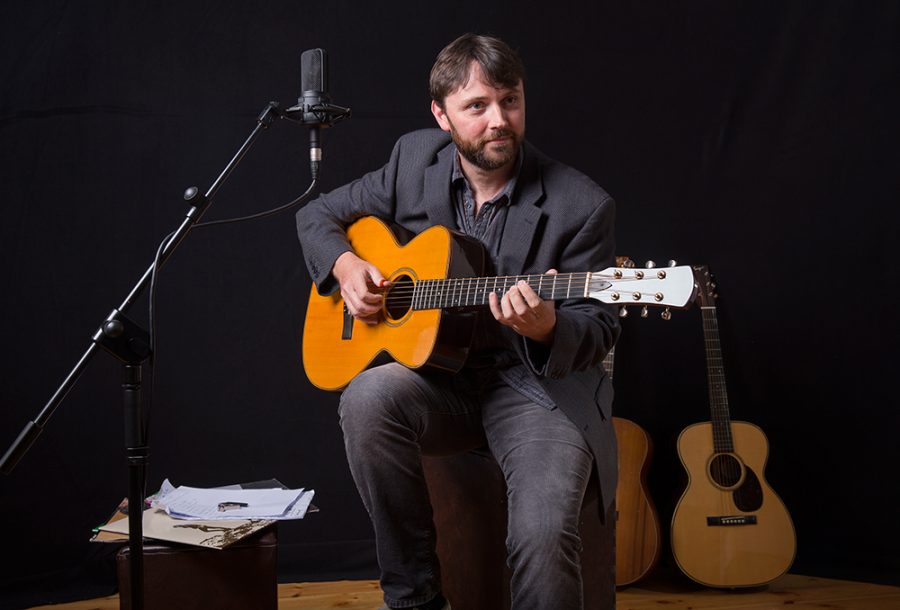 Regarded as one of Ireland’s finest guitarists, Dónal Clancy is the son of the world renowned singer Liam Clancy of  The Clancy Brothers and Tommy Makem and has, since the death of his father, focused his attention on the family repertoire of songs that he grew up with, while keeping the Clancy tradition alive with his solo performances.

Dónal grew up in a household and community steeped in music. He spent his early childhood in Canada and the US before his family settled back in An Rinn, Co. Waterford in 1983. His father gave him his first guitar at the age of eight and he was playing professionally by his early teens.  A founder member of the group Danú, Dónal left to join a trio with his father Liam and cousin Robbie O’Connell. Their debut tour in 1996 took them across the US from the Santa Anita Race Track in Los Angeles to the Lincoln Center in New York. They continued to tour together for a couple more years and recorded two albums before they disbanded in the early noughties.

In 1998, Dónal moved to New York where he became the go-to guitarist for many of the top Irish music acts in the US. He toured and recorded with Riverdance fiddler Eileen Ivers and was a guest with The Chieftains on their Tears of Stone Tours in Japan and the US. He has also been a member of the Irish-American super group Solas and contributed to the soundtrack of Ric Burns’ award winning documentary film New York. In 2006 he released his first solo guitar album Close To Home which The Boston Globe dubbed “a sweet masterpiece of melodic grace and riveting groove.”

In 2009 Dónal returned to live in Ireland with his wife Mary and their three children and in 2014, to much critical acclaim, he released Songs of a Roving Blade. The Irish Post awarded the album 5* calling it “folk singing at its best” and “a smashing album that should help to ensure these songs will never be lost.”

Dónal’s latest album On the Lonesome Plain features a mix of seven vocal tracks and six guitar instrumentals, including two of his own compositions A Strike for Victory, commemorating the 1916 Easter Rising, and an instrumental piece entitled Máirseáil na Conrach, preceded by The Green Fields of Canada. This is a particular highlight and showcases Dónal’s fingerstyle playing to great effect. Other standout tracks are Open the Door Softly from the pen of Scottish folk legend Archie Fisher and the classic ballad Reynardine.

“Most of this recording happened serendipitously in the Spring of 2015 while experimenting with various microphones and guitars. At the time I’d just acquired a turntable and some records by Anne Briggs, Martin Carthy, Shirley Collins and Davy Graham, which undoubtedly had an influence on the mood of the music. Along with the songs, I had a renewed interest in guitar playing which led to six instrumentals finding their way on here. It feels like this is a record of where I’m at musically at this time.” – Dónal Clancy

“The first time I met Dónal Clancy he was a small boy. I was working with his father Liam Clancy and Tommy Makem. The minute I heard this record it reminded me of his father – his tone and turn of phrase. As well as being a great singer, Dónal is also a great guitar player. This new record is a gem: Dónal’s singing and guitar playing throughout the album is excellent. If Liam Clancy were alive today, he would be very proud of this recording. He IS very proud of it, I’m sure!” – Arty McGlynn

“Dónal Clancy’s new CD is a classic recording of a man and a guitar, great material beautifully played and sung.” – Martin Simpson