The Academic perform tonight ahead of European festival slots 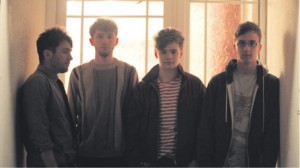 one of the most hotly tipped bands of 2014 play Dublin’s Grand Social tonight, Thursday 17th ahead of their appearances at Longitude this Saturday and Benicassim Festival in Spain on Sunday. The young Mullingar indie 4 piece have had quite a year already having played high profile shows with Little Green Cars, Kodaline  and The Pixes as well as their own headline Dublin show which sold out in a matter of days. The band are just putting the finishing touches to their highly anticipated debut EP which is expected out in September.

Support at tonight’s show comes from Luna Luna and Stephen James. Doors are at 8pm.