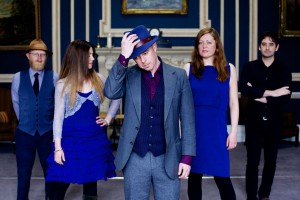 The much loved Dublin Alt-country act, The Blood Red Mountain Band, have spent some time crafting their new sound, and are set to release ‘All The Times’, the first single from their forthcoming album, “Far from Daylight”.  Telling a tale of late night, drunken breakups; it’s a single rich in longing and heartache, in  triumphant strings and edgy vocals.

The three boys and two girls of The Blood Red Mountain Band sail a peculiar ship made from bits of Americana, Country, Soul and Rock.  Almost two years in the studio with producer Anthony Gibney -whose most recent work was Alien Envoy’s album ‘Loads’ (which got a 9/10 from HotPress)- they are finally ready to let their baby go out into the world.  “I’m really excited to get this single out, we’ve put a lot of heart into these new songs and I can’t wait for our fans to hear it” said Alison Byrne, vocalist and oboe player with the band.

The single will be available on iTunes from Thursday, 23th April.

To celebrate the launch, the band play in The Sugar Club this Thursday, 23th April 2015.

Tickets cost €12 on the door or can be purchased in advance from the Sugar Club.  Support on the night from Andy Earley and The Dublin City Rounders.

The full album ‘Far From Daylight’ will be available from Sept 1st 2015.