A music CD produced in Nashville and featuring Irish and American artists has been released to honour the significant contribution made by Irish combatants on both sides of the American Civil War.  Two of the Irish heroes celebrated on the CD are Waterford born Union General Thomas Francis Meagher who also played a major role in establishing the tricolour as Ireland’s national flag, and Confederate General P 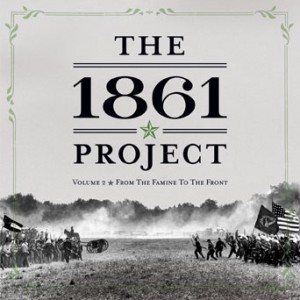 From The Famine To The Front is the second instalment of The 1861 Project, an ongoing series of groundbreaking releases from Nashville’s creative artists’ collective Cohesion Arts. The new CD graphically depicts the deeply moving stories of Irish immigrants during the American Civil War, through a collection of songs that draw on time-honoured Irish and American traditions to touch hearts on both sides of the Atlantic.

The CD’s producer and principal songwriter is Thomm Jutz, familiar to Irish audiences from his role as guitarist in Nanci Griffith’s band. His roots-music resume includes production and/or guitar credits with Griffith and Mary Gauthier, and Irish artists of the calibre of Liam Merriman, Tony McLaughlin and Neil White. The veteran musicians Jutz gathered around him to record Volume 2 inject Nashville heart and soul into this remarkable collection of Celtic-inspired songs, and bring real-life heroes from the past vividly into the present.

“The Irish tradition is woven tightly into so much great American culture and music,” Jutz says. “It continues to be a huge influence on me. Irish immigrants played such an integral role in the US Civil War. Some fought for the North, some fought for the South; the American conflict of brother against brother was also Irish against Irish.”

In the wake of the potato famine in the late 1840s, Ireland’s young population left for America in droves. Volume 2‘s opening track, “The American Wake,” performed by acclaimed Irish songstress Maura O’Connell with dobro master Jerry Douglas, captures the heartbreak of departure and the stark realization that those who left would likely never return home.

Jutz and his Irish and American co-writers unearthed a fascinating cast of characters and stories all but lost in the sweep of history. From folk icon Jim Rooney’s reflective, half-spoken tribute to Confederate General Patrick Cleburne, “Stonewall Of The West,” to Sierra Hull’s haunting ‘”Song Of The Mystic” and Liam Merriman’s rollicking take on “Irish Whiskey,” these songs are populated by historically important figures such as the afore-mentioned Meagher, Chaplain William Corby and Father Abram J. Ryan.

The 1861 Project, Volume 2: From The Famine To The Front brings history brilliantly and musically alive, reviving real people, real emotions, and issues that are still relevant. It is available through www.1861project.com, CDBaby, Topspin, and iTunes.