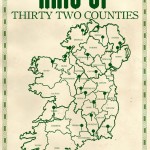 Inspired by Irish artists, poets, writers, creatives and musicians through the centuries Axis Of are currently spending the summer of 2012 touring all 32 counties of Ireland.

Axis of are no strangers to touring, having spent the last two years relentlessly performing throughout the UK and Europe, but this tour will present a unique experience for the North Coast three piece. From a main stage slot at this year’s Glasgowbury festival to busking in tiny west coast villages, with sweaty, DIY, city centre basement shows right through to remote and ancient pub sessions Axis Of will tour and document Ireland in a way more akin to likes of Yeats and The Dubliners than the bands of today.

Right at home on the road the guys will be promoting their debut album “Finding St. Kilda” which will be released later this year.