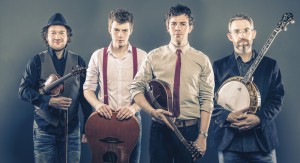 To celebrate the recent release of Gather The Good, the second studio album by the award-winning band We Banjo 3, Music Network are hosting a Dublin launch event in Powerscourt Theatre, Dublin on Wednesday 2nd July 2014. The event is free but has limited capacity. Email ei.krowtencisum@nimda for tickets.
Consisting of two pairs of brothers from Galway – David and Martin Howley and Enda and Fergal Scahill – We Banjo 3 have been impressing audiences around the world since the release of their 2012 album Roots of the Banjo Tree (winner of The Irish Times Traditional Album of the Year).
Featuring banjos, fiddle, mandolins, guitars, banjolin, percussion and David’s vocals, We Banjo 3 combine Irish music with Old-Time American, Ragtime and Bluegrass influences, revealing the banjo’s rich legacy from its roots in African and minstrel music through to the Irish traditional sound. For their new album, they have added blues, Canadian and Scottish music to the mix as well as new compositions by band members Enda Scahill and David Howley.
Gather The Good heralds a new chapter in the We Banjo 3 journey, taking influences from their travels and travails, and is available to purchase from Celtic Note and from www.webanjo3.com. Speaking about the album, We Banjo 3 said, “The last number of years have been extremely difficult for many people in Ireland and abroad. A very old and powerful antidote to negativity is simply the idea of gathering the good. On this album we wanted to capture that idea, to gather together good music and song, and reimagine it in our own unique style.”
According to Sharon Rollston, Music Network CEO, “We Banjo 3, 2011 recipients of Music Network’s Young Musicwide Award, continue to flourish with the support of the scheme and we are delighted to see them release their second album. During their time with Music Network they have toured extensively in Ireland and internationally, released their debut CD Roots of the Banjo Tree to critical acclaim and been selected to perform as part of the Horizons showcase at WOMEX ‘13.  We are very proud of their achievements and wish them every success with the new album”.
We Banjo 3 embark on a US tour later this year. For further details visit