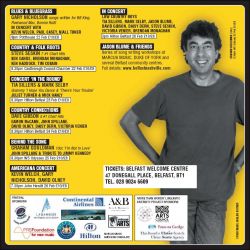 Budding songwriters and music lovers are in for a real treat in Belfast City Centre at the end of February. Some of Nashville&acutes most successful songwriters are coming to the Hilton Belfast for a special week of live concerts and workshops at the Continental Airlines Belfast Nashville Songwriters&acute Festival 22nd to 26th February. Songwriters&acute who have penned hits for Fleetwood Mac, BB king, Vince Gill, The Dixie Chicks and Johnny Cash will be performing with top local professional artists. Gary Nicholson a multi-platinum writer whose song â€˜One More last Chance&acute hit #1 in the Billboard charts for Vince Gill, Steve Seskin who wrote 7 #1 hits and Nashville&acutes Dave Gibson, 5 #1 hits have all agreed to come to Belfast.

Festival Director Colin Magee said:
â€˜We&acutere celebrating the art of song writing in different languages and exploring the musical heritage of two Sister Cities, Belfast and Music City Nashville. This is a wonderful opportunity to hear the writer behind the hit song. The international artists have also agreed to visit local community centres to inspire people to be creative&acute

Jason Blume whose songs have sold on 50 million CD&acutes worldwide for Britney Spears, John Berry and the Backstreet Boys will deliver a series of workshops and seminars. Grammy Award writers Tia Sillers and Mark Selby wrote â€˜Blue on Black&acute which stayed at #1 in the Billboard Charts for a record 17 weeks. Their song â€˜There&acutes Your Trouble&acute was a mega-hit for the Dixie Chicks and Tia&acutes Grammy song â€˜I Hope You Dance&acute was recorded by Ronan Keating. Graham Gouldman ex-10cc, wrote â€˜I&acutem Not in Love&acute and will perform his popular songs in a special concert at W5 Odyssey on the 25th February. All this has been made possible by sponsorship from local business and Arts support organisations. Anne Coulter of Panarts said:
â€˜Bringing these world-class songwriters to Belfast is just unbelievable and it&acutes all possible due to Laganside, Continental Airlines, Hilton, Avalon Guitars, Marcus Music, Arts & Business, NI Events Company, American Consulate, Belfast City Council Tourism, Castlereagh Arts and PRS Foundation. We are grateful to all our sponsors for their support of the arts&acute

Local artists including Juliet Turner, Brendan Monaghan, Ken Haddock, Tim Cobain, Paul Casey, Eamon McCann, The Low Country Boys and Ben Sands will share the stage with the Nashville guests. Talented Cork songwriter John Spillane, Mick Hanly and Niall Toner all perform at the festival of song. â€˜More Than Words&acute is an important part of the work of Panarts. This series of training events explores song writing in Irish, Ulster-Scots and English and up to the end of March, several schools and communities will take part in workshops creating new music. The Arts Council, Ulster-Scots Agency and Foras na Gaeilge have provided support for this eight week programme.