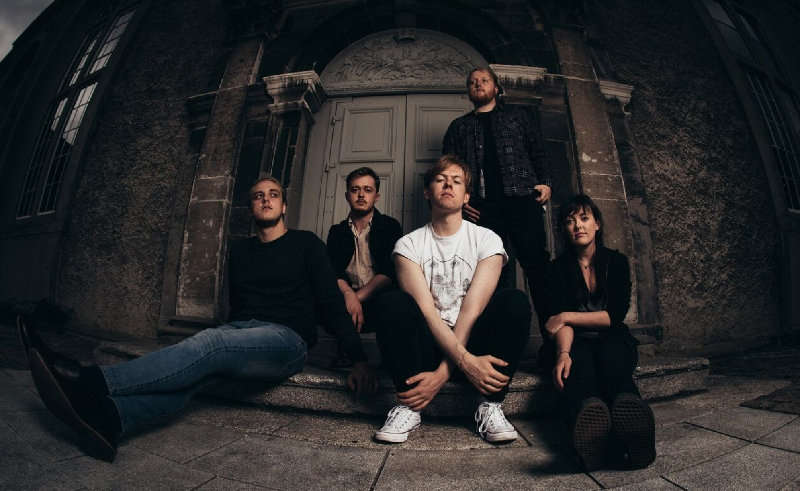 ‘Hurricane’ is an energetic guitar-driven track from Brass Phantoms evoking a desire to grow and a sense of inner-reflection with its honest lyrics and textured sounds. On the song, band member Greg Whelan says: “Hurricane is definitely one of the songs we’re most proud of on the album. It has quite an accessible sound, but there’s quite a bit of depth and openness in the words, and the energy in the music accompanies that quite well. We’re so excited for people to hear it, and the entire album”.

The track is just a taster of what’s in store from their forthcoming debut album ‘Holding Out For Horrors’ set for release 18th September. The Dublin five-piece, indie rock band has an eclectic mix of influences, ranging from Joy Division to The War On Drugs. So far, the band have released their well-received single ‘Waiting Up‘, which garnered national airplay.

Their guitar driven, drum fuelled track City Of Wolves was used to promote Irish television coverage of the UEFA Champions League this year, as well as being added to Spotify’s editorial Hot New Bands playlist.

Their music featured on the likes of BBC Radio 6 with Steve Lamacq, Clash Magazine, The Metro, RTÉ, Hot Press, The Irish Times, JOE, Today FM, 98FM, Radio Nova, Amazing Radio, Nialler9, Hot Press, The Last Mixed Tape, Golden Plec and more. No strangers to the live scene, Brass Phantoms have toured throughout Ireland, the UK and the United States, having been listed as one of the top acts to see at MONDO NYC Festival. They have a host of major festival appearances under their belts plus support tours for the likes of Delorentos and The Slow Readers Club.

“Exuberant indie disco with a dancefloor shimmer, the band’s songwriting cuts a little deeper” – Clash Magazine
“Brass Phantoms certainly exceed their own ambitions. The turbulent music is given a clear hook with the choruses taking centre stage… – The Last Mixed Tape
“A promising new upstart from Dublin” – Steve Lamacq, BBC Radio 6
“The bands blend of killer vocals, anthemic choruses and soaring guitars has made all the right tongues wag” – Hot Press Magazine