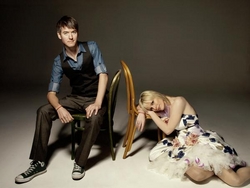 Carosel are a folk pop duo – engaged to be married – who make beautiful music together. Sure to be crowd favourites at this year’s Oxegen festival in July.

It wasn’t until months after he started dating her that classically trained guitarist Pete McGrane knew his girlfriend Michelle Phelan could sing. But by the crystal clear sounds of their infectious, upbeat pop folk, it would seem the now-engaged couple had been making music forever.

After a series of small gigs from 2007 through 2008, and with Phelan’s feet on solid performing ground, the two played the Guinness Storehouse, the main stage at the Cork Jazz Festival and the Electric Picnic. Carosel’s first studio album, Kaleidoscope, was the result of a vacation to the south of France, where the pair began to write material for the record. With the help of Cora Venus Lunny and Justin Carroll, the duo strung together an uplifting collection of sprightly earworms that was released in February. Kaleidoscope earned the title of Album of the Week from Radio One and the Larry Gogan Show, and The Star said it “had a feel-good factor of 10.”

Now, already compared to the likes of Feist and Regina Spektor, the Reekus act are contentedly waiting for what comes next.