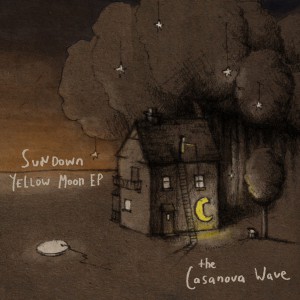 This Friday (12th September) sees the launch of the new EP Sundown Yellow Moon from The Casanova Wave.

The Casanova Wave is Waterford-based musician and producer Brian McCartan and Sundown Yellow Moon is his new 4-track EP featuring collaborations between The Casanova Wave and a number of artists – including Biggles Flys Again, In The Willows, Damo Tubritt, Eoin Dalton and Sarah Grimes. The album cover illustration is by Jacob Stack.

In Brian’s own words, Sundown Yellow Moon is “a collection of songs about relationships, romantic or otherwise, and particularly the (thus far) seemingly cyclical nature of them, wondering why that is, and wondering is that how its always going to be?”

The first single from Sundown Yellow Moon is New Sensation (Hopes and Aspirations” featuring Conor Deasy of Biggles Flys Again on vocals (YouTube / Soundcloud / Bandcamp) and today sees the release of the the second single -“Colours Burst (The Joys of Being)” which is a new collaboration with Waterford/Dublin based band In The Willows.

The new video for “Colours Burst (The Joy of Being)” is now streaming on YouTube.

Sundown Yellow Moon is out Friday 12th September on all good online stores and digital hubs and can be pre-ordered now on Bandcamp from http://thecasanovawave.bandcamp.com/