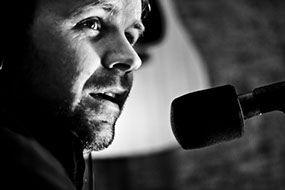 Singer/songwriter Paul McDonnell from Dublin, was crowned winner of the prestigious Christie Hennessy Song Contest 2014 on Saturday night in Tralee, Co. Kerry with his winning song “Be All You Can Be” (co-written with Dave Molloy & Cathleen Flynn)

The live final of the fourth annual IMRO Christie Hennessy Song Contest took place on Saturday, 22nd November at the Fels Point Hotel, Tralee. Ten finalists, selected from just under 300 entries from across Ireland and beyond, performed their songs in front of a live audience and panel of expert judges. The winning songwriter was presented with a cheque for €1,000, courtesy of Irish Music Rights Organisation (IMRO), Tralee Chamber Alliance and Tralee Credit Union.

Special guest performer on the night was Don Baker, who performed some of his much loved back catalogue.

The IMRO Christie Hennessy Song Contest takes place as a tribute to the life and music of one of Tralee’s most famous sons. Christie grew up in a house full of music in Tralee and went on to become one of Ireland’s best known singer-songwriters. Among his songs which went on to be recorded by other artists were “All The Lies That You Told Me” performed by Frances Black, “Don’t Forget Your Shovel” performed by Christy Moore and “Oh Jealous Heart” performed by Moya Brennan.

Through his writing/production partnerships with great people in Ireland and USA Paul McDonnell has built a body of work that is finally getting some solid recognition.

In 1994 Paul teamed up with producer/writer David Molloy. Dave is also the director/producer at Cellar Club Studios www.cellarclub.com

Recently their songs – Superman, Heartbreak Pier, Funny Road, Welcome To The Real World, Life Like Mine and Pray have been recorded by multi platinum selling artists Tommy Fleming, De Danann and up and coming artists Richie Hayes, Valerie Armstrong

In June 2012 They wrote a song “ TAKE A LOOK AROUND YOU for “ The Quays Shopping Centre Newry” – It ran on Major TV  and  National Radio for 6 months.

Scott and Paul co wrote “Home To Me” with Ruby Amanfu (Grammy nominated Artist from Nashville – currently touring/guest vocalist with Jack White – www.rubyamanfu.com ). They are building a strong body of work – samples to be found on music page include –  If You’re in My Heart, Storm Chaser, Home To Me.

In 2013 Paul started writing with orchestrator/pianist Gavin Murphy (Van Morrison, Sinead O’ Connor, West Life). – Samples of their work – “ Somebody Tell Me Why,

Della Mannion is one of Ireland’s best vocalist/writers. She is currently recording her debut album with Dave Molloy.