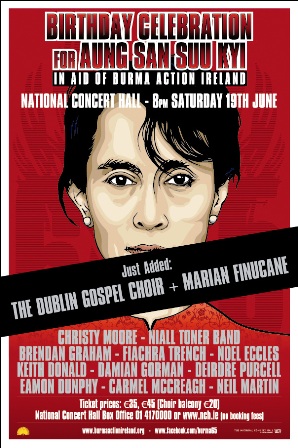 On June 19th, Aung San Suu Kyi will turn 65 having spent most of the last 20 years under house arrest. To celebrate her life and her political cause, Moving Hearts musician Keith Donald has assembled a stellar line-up of Irish literary and media legends including Eamon Dunphy and Marian Finucane. The evening will also feature performances and readings from Damian Gorman, the Dublin Gospel Choir, Fiachra Trench, Carmel McCreagh, Deirdre Purcell,Brendan Graham, Niall Toner, Noel Eccles and more.

This is will be the first time such a group has assembled and in drawing attention to her birthday, the concert will raise public awareness around the on-going detention of Suu Kyi and the violent and oppressive military rule under which the people of Burma continue to suffer. Daw Aung San Suu Kyi is the symbol of hope for the Burmese people. In 1990 she was elected by a huge majority to form a civilian government, but was imprisoned by the Burmese military.  She has been under house arrest most of the time since then.  Her political colleagues were also imprisoned and many have died in custody.

Speaking about the Irish concert, her cousin, Prime Minister in Exile Dr Sein Win, said: “Music is the international language of people and musicians play an important role in conveying the message of oppressed people to the world through music and song. In that way, musicians are responding to the call of Aung San Suu Kyi, who has asked us all to use our liberty to promote the freedom of Burma’s 52 million people who are prisoners in their own country.”
Of his involvement in the cause, Irish folk legend Christy Moore said “I am constantly aware of Aung San Suu Kyi’s situation, I am constantly aware of her incarceration”. Keith Donald adds “Aung San Suu Kyi is the Mandela of the twenty first century. Her situation serves to remind us that we should be grateful for our freedom and do whatever we can to help others achieve it.”
All proceeds from the concert will go to Burma Action Ireland.
BOOKING AND LISTINGS INFORMATION
What:                   Aung San Suu Kyi’s 65th birthday concert featuring Christy Moore and others
When:                  Saturday June 19, 2010
Time:                   Doors at 7.30pm ; concert starts at 8pm
Tickets:               €45/€35/€20
Booking:             In Person: National Concert Hall box office (DAYS AND TIMES)
Telephone: 01 4170000
Online: www.nch.ie <http://www.nch.ie/>
** All proceeds from this concert will go to Burma Action Ireland to aid their continuing efforts to raise awareness for the violent military oppression suffered by the people of Burma. For further information on Burma Action Ireland – www.burmaactionireland.org http://www.burmaactionireland.org/
Latest News