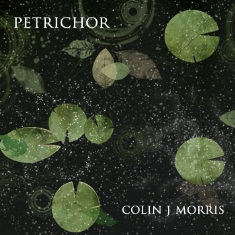 The first EP ever to excite your olfactory as well as aural senses?

Imagine a tryst between Brian Eno, Olafur Arnalds and a classic Moog synth in a Berlin back alley circa 1982. Ambient? Check. Haunting? Certainly. Interesting? You betcha.

Petrichor, the debut EP from Colin J. Morris, is all of these things, and more. This 26 minute, instrumental 4-track EP is, like all Morris' work, music for thinking to, walking to, basking in and maybe getting a little lost in (in a nice faffing-around-on-a-Sundayafternoon kind of way, mind you).

The EP's title, Petrichor, refers to the scent of rain on dry earth, as Colin explains: "I've always been fascinated by music evoking smell, instead of the other way around (I'll get there someday!)." The four tracks combine a variety of influences and moods, from the austere perfection of 'Leningrad' to the earthy, elegiac 'Sylvan', the luminous, carefully constructed cacophony of the epic 'Radium Dials' (think Beethoven with an iBook) to the innocence and wonder of 'Carbon'. Petrichor is available on Bandcamp on a very friendly "pay what you can" basis (link below).
The stunning artwork for Petrichor comes from illustrator Morgan Acker and was all hand-drawn with water colours, graphite and ink. Morgan also created the forthcoming video for Carbon which will be seen on a social network near you very soon.
Colin J Morris is a composer, producer and multi-instrumentalist. Colin produces all of the bands featured on RTE2 television's award-winning When Under Ether music series. Past acts include Villagers, James Vincent McMorrow, And So I Watch You From Afar and Gomez.
Colin's day job is writing music for film, TV and theatre with fellow composer, singer Miriam Ingram, under the name Tootsweet. Together they scored the IFTA shortlisted film, Eamon, which was also part of the official selection at the Toronto Film Festival.
They've also written scores for a host of TV and theatre productions, including award-winning theatre director Bisi Adigun's production of the Ghanaian play Through A Film Darkly.

Back in the '90s when he wasn't long out of short pants, Colin was an integral part of critically acclaimed shoegazers Sunbear.
The intervening years have seen him play guitar, bass, synth and piano for a veritable who's who of Irish alternative music, including The Ruby Tailights, Carol Keogh (The Plague Monkeys, The Tycho Brahe, Autamata), Ann Scott, and Nina Hynes. He's also produced remixes for Strands (Steve Shannon's solo moniker), Ann Scott and A Lazarus Soul.
"Soft and secretive, strident and taciturn – contradictory, but I'm only human in a world of computers. Perhaps androids would hear this as a digital equivalent of birdsong or seashell echoes." Harmless Noise