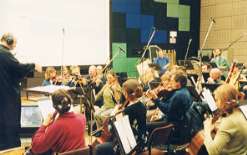 The Contemporary Music Centre, in association with the RTÉ National Symphony Orchestra, presents a new format pre-concert talk entitled Composers in Conversation as part of the RTÉ NSO's lunchtime Horizons Contemporary Music Series 2011. All concerts are free of charge.

Composers in Conversation features each of the five composers of the Horizons Contemporary Music Series in conversation with Evonne Ferguson, Director, The Contemporary Music Centre.
Kevin O’Connell (11 January), David Fennessy (18 January), Piers Hellawell (22 February); Philip Hammond (10 May) and Jerome de Bromhead (17 May) are the five featured composers. Each Composer in Conversation event will take place at 12.30pm in the John Field Room, prior to each concert starting at 1.05pm in the main auditorium.
“The RTÉ National Symphony Orchestra Horizons Contemporary Music Series has always been a very welcome start to the New Year for me and I am delighted this year to have the opportunity to converse with the five featured composers on their exciting programmes and work” says Evonne Ferguson, Director, The Contemporary Music Centre.
A total of 15 works by seven different composers will be performed over the five concerts taking place between January and May. Two world premieres, by Kevin O’Connell and Jerome de Bromhead, feature as well as a 60th birthday tribute to Philip Hammond. Conductors include Gavin Maloney, Fergus Sheil, Garry Walker and Colman Pearce. Admission is free to all Composers in Conversation events and all concerts.
Born in Derry, now based in Dublin, composer Kevin O’Connell is a member of Aosdána, the Irish affiliation of creative artists and teaches composition in the Royal Academy of Music. The prestigious Paul Hamlyn Foundation Award was recently awarded to David Fennessy, who born in Kildare is now based in Glasgow. Professor of Composition at Queen’s University, Piers Hellawell was recently awarded a Leverhulme Fellowship in 2010. Philip Hammond, born and living in Belfast, retired from the Arts Council of Northern Ireland in 2009 and is now active as a writer as well as a composer. Jerome de Bromhead, born and living in Waterford, a member of Aosdána, has had all but one of his orchestral works premiered by the RTÉ National Symphony Orchestra.
For detailed biographies and further details on all composers please visit www.cmc.ie
The Contemporary Music Centre is Ireland’s national archive and resource centre for new music supporting and developing the work of composers throughout the Republic and Northern Ireland. It is used on a national and international basis by performers, composers, promoters and members of the public interested in finding out more about music in Ireland.

Tickets and booking:  Admission free to all events. Events are ticketed. Tickets available through the NCH box office in advance. Booking: 01 417 0000.
Latest News
ADD TO MQ