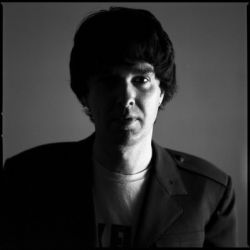 â€œINTIMATE, INTELLIGENT, INTOXICATINGâ€ is what Hotpress said of Dubliner David Hopkins debut single, Amber and Green, while awarding it â€˜Single of the Issue&acute. Now David is about to release his first Irish album. â€œINTELLIGENT + FIERCELY CREATIVEâ€- Hotpress

Also called Amber and Green the album was recorded in San Francisco, where David lived for a number of years, and has been described as â€œAn intelligent and fiercely creative record, underpinned by its creator&acutes unrivalled talent on the keysâ€. David was keyboard player, founder member, and main songwriter with Dublin prog-rockers LIR in the â€˜90s, from the tender age of fourteen. Lir were a band noted for their great live shows, and hotly tipped for international success. However, David began to find writing and playing with a band creatively frustrating, and while touring in the States, David decided to stay behind when the rest of Lir headed home, and settled in San Francisco. He continued to do session work as a keyboard player with a number of bands, undertaking several nationwide gigs, including opening for The Who on their Quadrophenia tour. But disillusioned with session work in the late â€˜nineties David turned his back on the music scene for a while, only emerging to do his own music in the last couple of years. At a gig in San Francisco, David was spotted by the team behind The Killers who were quick to recognise his talent, and promptly signed him to a management deal. Now David&acutes music is available this side of the Atlantic with the release on Reekus of Amber & Green, a great vehicle for David&acutes creativity, with a range of beautiful songs, mostly recorded with David&acutes superb band in San Francisco. Now resident in New York, David will be returning to Ireland in August for the release of his album, and performing a number of live shows, both solo and with a band. Among his Dublin shows will be an appearance at the Olympia for the HWCH festival on Saturday 27th August, and a showcase gig, with full band, at the Sugar Club on Thursday September 8th, before returning to NY for a showcase at CMJ.