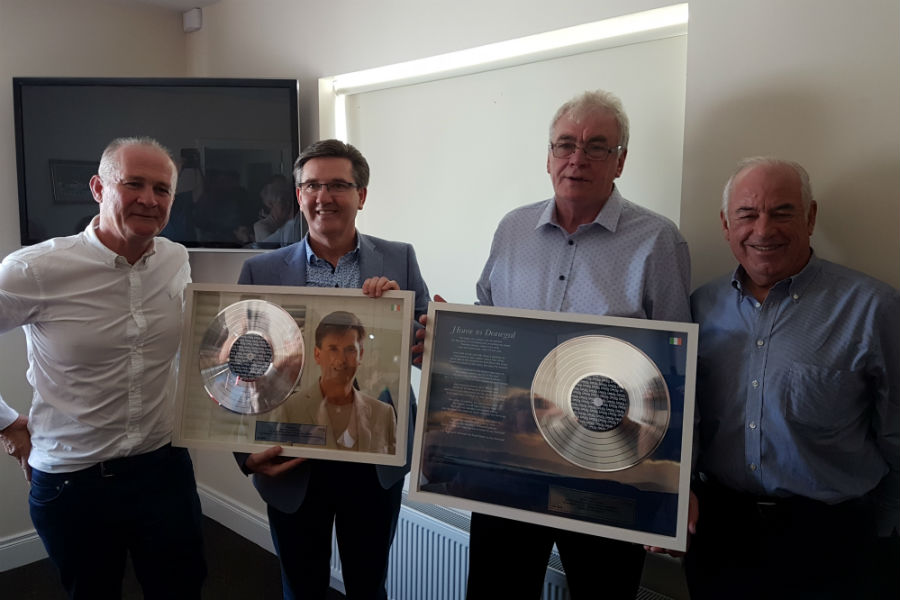 On Monday 30th July, Irish Music Rights Organisation (IMRO) CEO Victor Finn presented awards to Daniel O’Donnell, in recognition of his outstanding contribution to Country Music, and to Patsy Cavanagh in recognition of the ongoing success of his hit song ‘Home To Donegal”. The presentation took place in the The Daniel O’Donnell Visitor Centre in Dungloe, Co Donegal, during the Mary from Dungloe International Festival.

“The name ‘Daniel O’Donnell’ has become synonymous with country music in both Ireland and across the globe, where Daniel has been a shining ambassador and promoter of Irish music and culture. While Patsy Cavanagh has achieved the rare distinction of composing a work which has been so strongly embraced by the county of Donegal and Irish expats in particular, through the many unique and heartfelt interpretations of the song. IMRO feel it is important to recognise the impact of the craft of songwriters and musicians, it is an honour to present both Daniel and Patsy with their awards.” said Victor Finn, IMRO CEO.

Daniel O’Donnell, one of Ireland’s best-known performers continues to push out the boundaries of his career both on stage and TV in 2018 and 19.

He is the only artist in the world to score a hit in the UK album charts every year since 1988, an unprecedented and unbroken 30-year span and in doing so, he has outshone everyone from Michael Jackson and Madonna to the Rolling Stones.

In total, Daniel has now reached the UK Artist Albums Chart with almost 40 albums and has now amassed THIRTY-THREE Top 30 albums over the course of his career.  Daniel has also achieved eight number one hits in the UK music video/DVD charts over that period.

He makes regular appearances in the Billboard World Music Chart, received an honorary MBE from Queen Elizabeth, appeared on Top of the Pops, had his life celebrated on This Is Your Life and received multiple Entertainer of the Year/Person of the Year Awards in Ireland and the UK – to mention but a few of the many accolades.

Daniel’s remarkable career has moved on to a new level with his success as a TV presenter, just another facet to his ever expanding list of entertainment achievements. On receiving the award Daniel said, “I am thrilled to have been recognised by IMRO with this special award. It is always so gratifying to receive such an award in your own country from an organisation such as IMRO.”

Patsy Cavanagh writes about everyday life in a style that people identify with and his songs are in much demand by top Irish performers many of whom regard him as a “master wordsmith”.

He has had more than 100 covers of his songs recorded by various artists such as Daniel O’Donnell, Mick Flavin, Big Tom and Margo (just to name a few).

His song ‘Home to Donegal’ which is now considered the Donegal Anthem has been covered over 60 times including covers in America, Australia and Denmark (Kisser and Sören).

Patsy discussed the origins of the work, “I was sitting in the plane coming home from London one night watching the city lights disappearing and that gave me the opening line, ‘the lights of London are far behind’, from that the song just flowed. It is fantastic so many emigrants have identified with the song, while this award is the icing on the success of the track.”