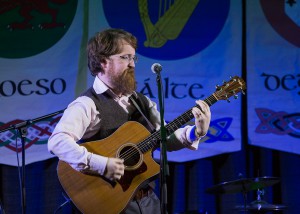 Enda Reilly continues his series of performances at St Finian’s Church on Adelaide Road this Saturday, 28th March, with support from Aisling Kavanagh. Enda’s set will include a mix of songs from “Amhráin i nGaeilge”, poetry songs, climate change songs and some of Enda’s other co-writes and compositions.

Enda is a singer, guitarist and songwriter from Dublin whose current projects include New Songs In Irish, his Climate Change Songs Workshops and Arise and Go! a collaboration with poet Stephen James Smith. Enda is a former winner of the IMRO Christie Hennessy Song Competition, Comórtas Amhráin Rónán Beo @3 and has represented Ireland with songs in minority language song competitions. He has played concerts with John Spillane, Kila, Liam O Maonlai and Rónán O Snodaigh amongst others.

Aisling Kavanagh has been playing and writing her own material for the last eight years. Following a succesful trip to Nashville in 2010 where she wrote with some of the city’s songwriting stalwarts including Tom Kimmel (Johnny Cash, Linda Ronstadt) and Sally Barris (Trisha Yearwood), Aisling released her EP “Tracks for Home” (Produced by Brendan Doherty) in 2011 to a very positive critical response.

Enda and Aisling have been friends and collaborators for several years and co-wrote “Do Mhuirnín Ó”, featured in Enda’s new album “Amhráin Nua i nGaeilge”, as part of their successful partnership. “Do Mhuirnín Ó” was a finalist in the the Sean McCarthy Ballad Competition and Aisling also tasted success as a runner up in the renowned Glinsk Song Contest. In addition Aisling’s songs have featured in an Irish short film production titled “Tome Feenes”. Aisling currently lives in Scotland and is working on new material. She was delighted to be asked by Enda to play her first gig on home soil in over three years.

Tickets €10 if you book online at www.endareilly.com/gigs/ or €12 at the door. (Tickets bought online will be held at the door.)