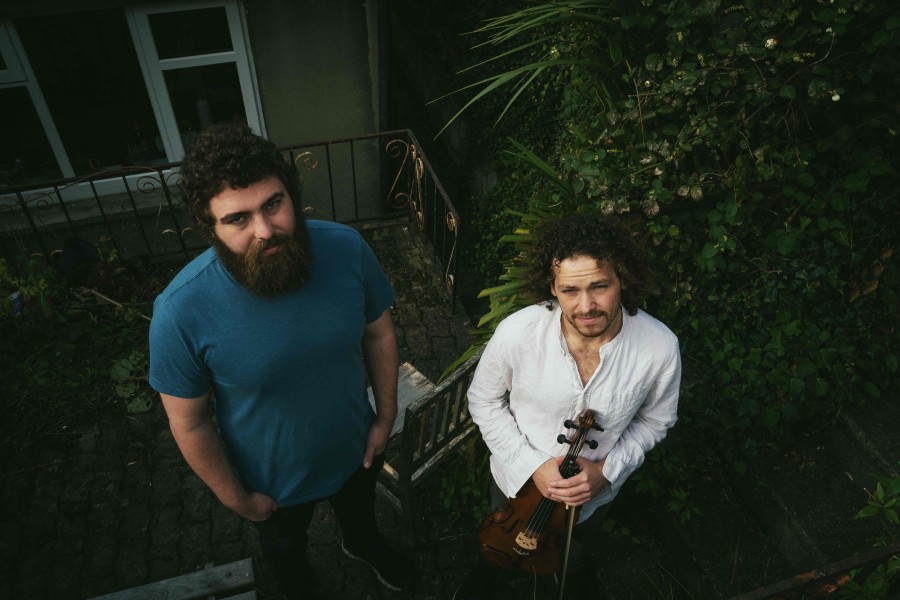 Dublin-based with Clare and Connemara connections, Eoghan Ó Ceannabháin and Ultan O’Brien have been playing together for many years in various bands, including contemporary Irish folk band Skipper’s Alley. Their involvement with Manx singer Ruth Keggin and the international Gaelic project ‘Aon Teanga (One Tongue)’ took them to Highland Scotland, where they carefully crafted their debut album at Watercolour Music, in Lochaber. And so ‘Solas an Lae’ (The Light of Day) was born.

The human voice and the fiddle are often thought of as musical cousins. ‘Solas an Lae’, Eoghan and Ultan’s debut offering, is a compelling exploration of that relationship, creating a unique dialogue that blends raw, rugged earth with the ethereal otherworld.

Bouncing songs and strings off one another, Eoghan on voice and flute, and Ultan on fiddle and viola, have created a duo album that emerges viscerally from the sean-nós roots of upbringing to blossom into two of the most articulate Irish musical voices on the scene today.

“We finished recording this album in October 2019 in Watercolour Music studio, a magical place nestled at the foot of Glen Scaddle and Cona Glen in the Scottish Highlands. We are delighted to be able to release this, digitally, during the lockdown. The weight of everything has grown heavier for many people, for many different reasons. We hope this bit of music can help fling off a bit of the weight and help people breathe a little bit easier.

We’ve been sitting on this for a year – we hoped to get it out in early 2020 but put it off in the hope of being able to play the music live. At this point, we don’t know when that might happen, so it’s time to get it out there!

There are certain tracks on this like Máirseáil na Síóg and Spikey Flynn that are just itching to be played in the real world. For now, we hope they get some people dancing around in the kitchen!”

‘Solas an Lae’ (The Light of the Day), the debut album from Eoghan Ó Ceannabháin and Ultan O’Brien is out now (November 5th 2020), via Watercolour Music. Order your copy of the digital album or vinyl on Bandcamp: https://eoghanultan.bandcamp.com/releases