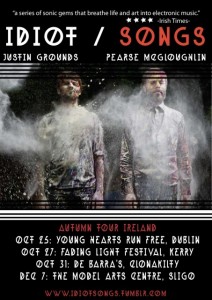 Idiot Songs is a collaboration between composer Justin Grounds and songwriter Pearse McGloughlin. The album of electronic chamber songs draws upon the themes and characters presented in Dostoevsky’s The Idiot and was recorded using traditional and non traditional approaches; the collection was largely recorded via Dropbox.

Devils is the second video from Idiot Songs’ self titled album directed by Kevin and Pearse McGloughlin. A video released earlier this year for Villages of Ether received a Staff Pick from Vimeo.

Idiot Songs are currently on tour and will play DeBarra’s in Clonakilty tomorrow Thursday 31st October.

‘a beautiful homage to the empathy and creativity of Dostoyevsky and without a doubt one of the best concept albums I’ve heard in my time’………. Harmless Noise

‘a series of sonic gems (gifted with beats and beautifully spectral spoken-word inserts) that breathe life and art into electronic music’…..Tony Clayton-Lea, The Irish Times 4****

‘the pair…create what the best albums manage to do, an atmosphere exclusive to itself with its own identity’….. Album of the Week, Nialler9

‘impresses on just about every level’ ….Album of the Week, Dan Hegarty, The Alternative, 2FM