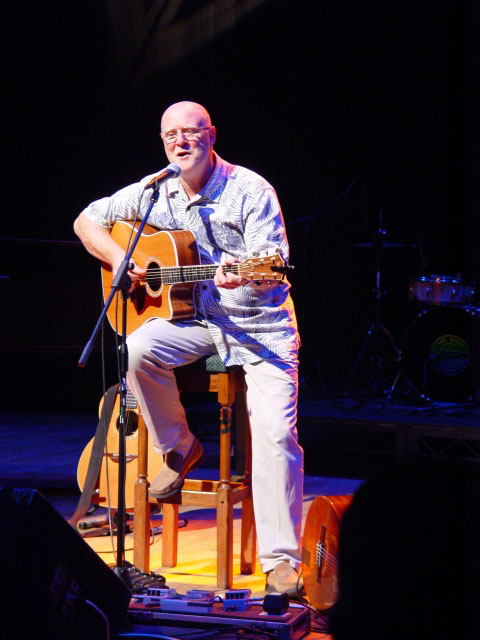 In part 1 of our review of IMRO’s very successful Culture Night, Derek Copley chats to song-writer Mick Hanly.
Sometime it can be hard to gauge which Mick Hanly is in front of you. One the one hand, he’s a very humorous and witty character, while on the other he’s a deeply honest, sensitive, personal man. Both of these attribute the sensitive Mick and the lad with the wit as sharp as a jagged bottle come through in the powerful songs he has written. Something we hoped to explore when we met up in Copyright House, the HQ of IMRO. It was part of Culture Night, where the city’s very public and hidden gems were open free of charge, for the evening.
IMRO were involved, with a host of live interviews with songwriters, some new and some venerated, successful veteran artists including, in this case, Mick Hanly, who had also brought along his guitar for a couple of songs. It was a wonderfully relaxed affair, with tea and coffee and biscuits – sure, yer at yer granny’s! With six interviews on the roster, it was up to Mick and yours truly to get things started. And here’s where the confusion came as to which Mick Hanly had turned up.
Unlike the often rambling relaxed way we can get our interviews completed for the printed page, this was a pressure gig, just thirty minutes each to tease the mind of some of Ireland’s most respected songwriters.
I started by asking what it was that first attracted Mick to words in music. What was it that made him want to be a wordsmith?
‘How Much is the Doggy in the Window?’ he replied, deadpan look on his face. Right! He’s probably joking I thought, but he has one of those personas that could shoot you down for daring to sneer at such an ‘important piece of music’. What to do? Who’s there? Which Mick is talking to me now?

Whichever it was, I felt like doing a Mick the Miller and bolting from the trap. Thankfully, after a brief pause which sent the crowd into fits of laughter, he continued: ‘Ah no,’ he said, ‘I wasn’t really interested much in words to begin with.’ He was being serious this time, I could tell that, but what did this say for the rest of this singer-songwriter interview session? A songwriter who wasn’t interested in words? I was getting ready to dash again.
‘I was more into the sound of things. The sound that was being created. The sound that even the words made, but I wasn’t listening to what they meant.’ It happened for Hanly around the time of his awakening to Irish music, having been in Miltown Malbay and being infected by Willie Clancy’s piping, this inspired his first attempts at song-writing.
Having begun to take an interest in his ‘Irishness’, as he put it, he got into good company with the likes of Micheál O’ Dhomhnaill and he formed the group, Monroe, with Micheál. He also put out two excellent solo albums, which bolstered his reputation in the folk community.
However, as he reflected this evening on those albums, one song which he had penned stuck out, almost making him cringe. ‘My song-writing back then was very much naive,’ he said. He went on to explain this statement in the context of ‘The Reluctant Pirate’, a come-all-ye style ballad which he had wrote. ‘Jaysus, I don’t know where that one came from. Sure I’d never seen a pirate in my life!’ he joked, shaking his head at the memory of it. A song of unrequited love and roguery on the high seas, it fits nicely with a lot of ballads to be found in dusty old books on dusty old bookshelves. For Mick, though, he felt that there were other, more relevant subjects which needed his attention as opposed to imaginary pirates on imaginary seas.
He eventually got around to writing those songs he needed to write, including ‘All I Remember’ and ‘I Feel I Should Be Calling You’, not forgetting the successful ‘Past the Point of Rescue’, among his vast repertoire. There was a line in his autobiographical ‘Wish Me Well’, which reads: ‘I haven’t written a song in six months…. It’s been a barren time.’ Before I could ask him, he answered my question by saying, bluntly: ‘Yeah, try four years!’ He wanted to return to writing, but it hadn’t been happening for him recently.
What was the reason for this? Did he not have a magic formula for producing hits like ‘Past the Point of Rescue’? ‘Anyone who tells you they have a trick or a formula for writing songs, run a mile from them,’ he said frankly, a statement which drew much agreement from the assembled audience of musicians and music nuts alike. So, how would he go about writing, then, when he would be writing? ‘I’d have to force myself to sit down. There’s no other way. And you can’t be too precious about what you’ve written. You have to seriously decide what will work and what won’t and if it doesn’t, then get rid of it.’
Time was up and amid all the yapping, Mick hadn’t got a chance to strum a couple of chords on the guitar. I was reluctant to ask him what song he would play us out with, for fear of him replying: ‘How Much is that Doggy in the Window’.
He didn’t, instead opting for one of the more recent songs he had written, Damaged Halo, about an old school friend he had met at a gig one night. And so it finished, with both Mick the Wit and the Mick the Sensitive combining for an entertaining evening.
Interviews