The Irish Music Rights Organisation (IMRO) is delighted to announce that the seventh IMRO Live Music Venue of the Year Awards will take place on Tuesday 3rd February 2015 at IMRO HQ in Dublin. 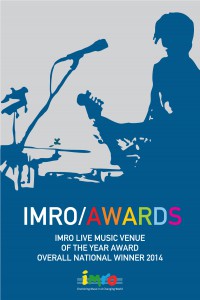 The annual awards celebrate the dedication and passion of those who work in Ireland’s live music venues, providing the public with an exceptional live music experience, week in, week out.

More than 10,000 IMRO members considered hundreds of venues across the country for the shortlist. Venues were judged on their commitment to providing the core elements that make for a great live music venue – atmosphere, sound and lighting, staging, diversity of programming and importantly, the staff and management of each venue. IMRO members also voted on Ireland’s music festivals, delivering a shortlist of their top ten festivals.

Of the Awards, Victor Finn, IMRO Chief Executive said, “Over the years these Awards have become a much sought after industry accolade. They also highlight the vital economic and social contribution that venues and festivals make to local economies and the enormous role they play in providing a public platform for Irish & international songwriters and performers”.

At the ceremony in IMRO HQ in Dublin on February 3rd, awards will be presented to the leading live music venue in each of the following regions: Dublin, Leinster (excluding Dublin), Connacht, Munster and Ulster (Donegal, Monaghan, Cavan).  The IMRO Live Music Festival of the Year will also be presented on the night.

Live music fans should simply log on to https://www.surveymonkey.com/s/imrovenueawards choose their favourite from the shortlist provided, by February 2nd.  One lucky voter will win a Samsung Galaxy Tab 3.

The Hot Press Live Music Venue of the Year Readers Poll will also be part of the awards and Hot Press fans can vote at http://www.hotpress.com/readerspoll/vote.php?id=13208103&action=view

“Ireland has a wonderfully vibrant music scene right now,” Niall Stokes, editor of Hot Press said, “with a fresh wave of talent coming through and making impressive waves internationally. But with sales of albums having fallen dramatically, live music is more important than ever, as the lifeblood of the industry. Which makes it crucial that we have great venues all over Ireland in which our songwriters, artists and bands can find their voices, build their experience and win support.

“The votes from the public for our best venues have been flooding in on http://www.hotpress.com/hotpressreaderspoll2014/

,confirming that the IMRO Live Music Venue Awards are hugely important, as a way of nurturing and rewarding excellence. We are really looking forward to seeing who comes out on top!”

IMRO Rest of Leinster Live Music Venue of the Year 2014

IMRO Music Festival of the Year 2014