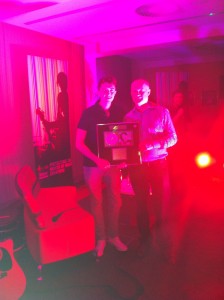 Dublin singer-songwriter, Ryan O’Shaughnessy, became the latest recipient of the IMRO Number 1 Award last week at a packed event in the IMRO offices. Ryan’s self-titled debut album reached Number 1 in the Irish charts in its first week of release. The album also made the top ten in the UK album charts and Ryan embarks on a UK tour this October.

The mini album, which was recorded in May, features six original songs written exclusively by Ryan. The lead track, “No Name”, which Ryan performed on Britain’s Got Talent, won him a place in the final of that competition.

Ryan visited IMRO HQ to take part in a public interview with 2FM’s Paddy McKenna and treated the audience to a live performance of a selection of his tracks. Ryan is pictured here receiving his IMRO Number 1 Award by IMRO’s CEO, Victor Finn. The IMRO Number 1 Award was established to recognise the achievement of artists reaching the number 1 spot in the Irish Album and Independent Album charts. Previous recipients have included Heathers, Republic of Loose and The Coronas.