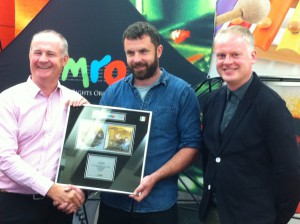 was invited into the IMRO offices last week to receive his IMRO Number 1 award in recognition of his latest album, “By The Rule”, reaching the top spot in the Irish Album Charts in May.

After spending the month of May touring extensively around Ireland as well as having just supported Elbow at their recent Kilmainham gig, Mick will be performing in the intimate, breathtaking location of the Mitchelstown Caves with support from The Young Folk on July 20th.

The IMRO Number 1 Award was introduced to acknowledge IMRO members who reach number 1 in the album charts here in Ireland or overseas. Mick Flannery is pictured here at the IMRO offices with IMRO CEO, Victor Finn and Director of Marketing & Membership, Keith Johnson.