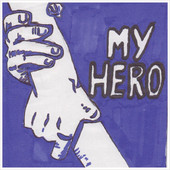 “My Hero”, a single written and recorded by the students of Transition Year in Presentation Secondary School Clonmel as part of an IMRO workshop for RTÉ’s Big Music Week, has just been released in aid of St. Vincent de Paul.

Last September, the Transition Year students took part in an IMRO songwriting workshop with singer songwriter, Luan Parle, and songwriter and producer, Gavin Ralston, as part of the build-up to RTÉ’s Big Music Week. The aim of the workshop was to create and record a brand new song from scratch in one day, ready to be performed live on the RTÉ Big Music Week train when it pulled into Clonmel train station the following week.

With the students’ theme for Transition Year being “Heroes”, they decided to write the song about one of their own heroes, Alice Strain, a teacher of theirs who died tragically in a car accident earlier this year. The lyrics, tone, melody and harmonies were all carefully crafted throughout the day as the girls worked together on their song, “My Hero”.

Their live performance on board the RTÉ Big Music Week train the following week took everyone’s breath away, including close members of Alice’s family who were in attendance on the day alongside her fiancé. The story and video of their performance received over 25,000 hits on TheJournal.ie and led to the students performing their song live in Vicar Street to a standing ovation as part of the RTÉ Big Music Week gig in aid of Barnardos.

Now their single, “My Hero”, has been released via iTunes with proceeds being donated to St Vincent de Paul. Speaking of the release, Michael O’Loughlin, Principal of Presentation Secondary School, Clonmel said:  “Alice had a great affection for the St. Vincent De Paul organisation. She was involved in a number of initiatives over the years in our school which helped to raise funds for SVP, especially at Christmas time. It is very poignant that the song is being released around the Christmas period. We hope people will download the song from itunes and help raise much needed funds for SVP”

You can download “My Hero” now from iTunes here: https://itunes.apple.com/ie/album/my-hero-rte-big-music-week/id757654920