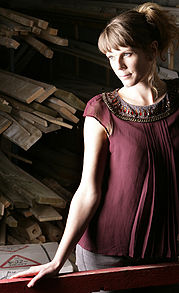 Turner's live shows should be experienced. She is a quiet, relaxed performer with a wicked sense of humour. Her voice is unusually clear and sweet and her between song anecdotes are amusing, eccentric and off-the-cuff. Prepare to be drawn in and bowled over!

Juliet Turner stumbled into making music. She was given a guitar for her fifteenth birthday and met a poet who told her to start writing her own songs. In 1996 whilst studying for a year in Glasgow, she was offered the chance to record those songs in a little studio called ‘Heaven’ with small independent label ‘Sticky Music’. The result was ‘Let’s Hear it for Pizza’. People are still buying the album years later for songs such as ‘Pizza and Wine’, ‘Beyond the Backyard’ and ‘Indian Summer’. It is a rough and ready album with some gorgeous lyrics. Innocent yet a little twisted.

Juliet moved back to Dublin in 1996 to finish her Arts degree and to start playing live shows. Word travelled swiftly on the Dublin music scene and soon Juliet was opening shows in the city for international artists such as Bob Dylan, Gabrielle, Natalie Merchant, Sting, U2, Art Garfunkel and Brian Adams and was touring with Joan Armatrading, Brian Kennedy, Ron Sexsmith and Roger McGuinn from the Byrds.

In September 1998 Juliet performed Julie Miller’s song “Broken Things” at the memorial service held to remember the people who were murdered by the Real IRA in Omagh, Co. Tyrone, N. Ireland in that year. Omagh was the town where Juliet had attended secondary school. She refused to release the song as a single, but recorded a version for the album “Across the Bridge of Hope” to help raise money for those affected by the disgusting atrocity. The song was also used under the end credits of the film “Omagh”.

In 2000 Juliet set up her own label ‘Hear This! Records’ with her manager the late Derek Nally. She released her second album ‘Burn the Black Suit’ on the label and it went double platinum in Ireland. This album, produced by Gerard Kiely, was a little more ambitious –’pop veering into darker territory’ as one reviewer put it. It gave the world three catchy pop tunes –’Dr Fell’, ‘Take the Money and Run’ and ‘Burn the Black Suit’. Also the haunting ‘Belfast Central’ and the duet with Brian Kennedy on ‘I hope that I don’t fall in love with you’, written by Tom Waits. This album was recently voted one of the top 100 Irish albums of all time by Hot Press Music Magazine Readers. Number 51.

‘Season of the Hurricane’ was released in Feb 2004 and went platinum in Ireland in June of the same year. This offered the radio hit ‘Everything Beautiful is Burning’ and went to No. 8 in the Irish album charts. It also found itself nestling at no. 5 in the Amazon internet charts between Norah Jones and the Red Hot Chilli Peppers. Less immediate than the previous album with smoother production values, Turner’s music became even more difficult to categorise and her subject matter more intriguing. The stand out track on this album is the starkly beautiful ‘No Good in this Goodbye’.

‘There was no love as ordinary as ours.
We walked hand in hand through this work day world.
And the swiftness of your leaving caught me by surprise.
There is no good in this goodbye’.

In Feb 2005 Juliet picked up an Irish Meteor Music Award for best Irish Female Performer, alongside artists such as Paddy Casey, PJ Harvey and Snow Patrol. Deciding that the time was right to record some of the live shows, she released “Juliet Turner – Live” in November 2005, recorded over three nights in one of her favourite small Irish venues, the Spirit Store in Dundalk. This set the tone for the gigs to follow over the next couple of years as Juliet began to play all her live shows in small acoustic venues accompanied only by guitarist Brian Grace.

Then with three studio albums, a live album, double platinum sales and a Meteor Music Award under her belt, Juliet decided that a change of scene was needed and in October 2006 returned to Trinity College Dublin to undertake a four year BSc in Clinical Speech and Language Studies.

Alongside the studies, the song-writing and performing continued and Juliet recorded her fifth album in 2008 with producer Keith Lawless in a warehouse in Kinsealy. Described by the Irish Times as ‘one of the most intriguing of Irish female song writers, arriving several years ago with a guitar and a batch of brittle, poignant songs; her broad accent and even broader outlook; her bitter-sweet tastes all marking her as one to watch’, this new album showed an exploratory and unsentimental side to Turner’s songwriting. The slow pace of recording and the change of scenery from tour bus to lecture hall seemed to invigorate Turner and the album was a combination of beautiful, intelligent songwriting and subtle musicianship.

The new batch of songs are thoughtful and less acerbic than some of her previous writing and the narrative lines running through the album are sympathetic and full of warmth. Listen for “Elder of the Tribe”, “High Hopes” and “The Girl with a Smile” in particular. The release of new material seems to fall in a four year cycle and this new album was eagerly anticipated. It did not seem to disappoint, being her most critically acclaimed album to date. On stage with long time guitarist Brian Grace, Juliet Turner has a wry charm, a beautiful voice and fine lyrics, making her a compelling and witty live performer.

In 2010 Turner completed her degree at Trinity College in Clinical Speech and Language Studies.

In July of this year Juliet saw the passing of her long term friend and manager Derek Nally. Stating on her website, "I was deeply shocked and upset to hear of Derek Nally’s death on Thursday afternoon following a sudden heart attack. Derek and I have worked together since 1997 and it was thanks to his support and belief in my ability as a song-writer that “Burn the Black Suit” ever saw the light of day. He was a generous, enthusiastic, intelligent and hard-working man, respected by those he worked with, and he will be greatly missed.