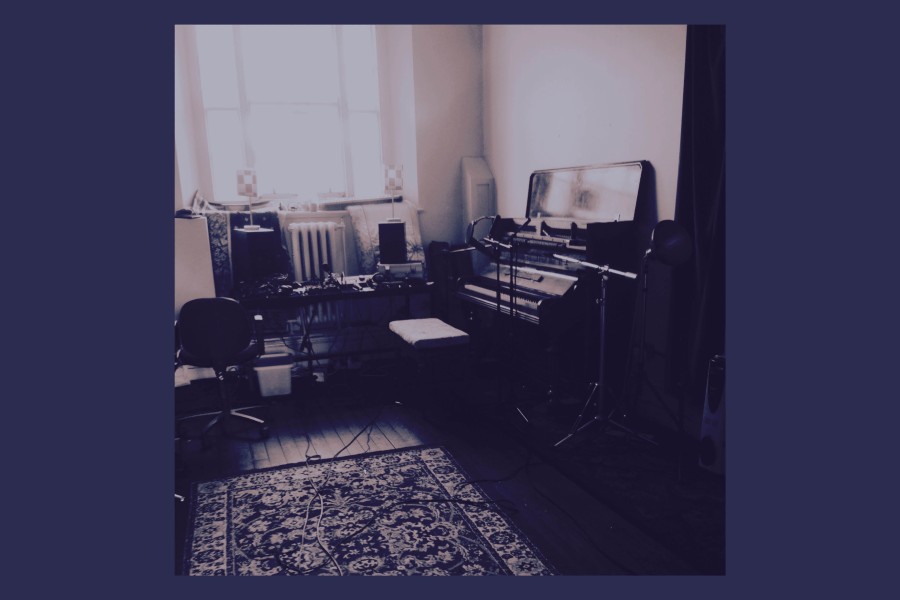 ‘Empire One’ by Katie Kim & Seán Mac Erlaine is the first single from ‘In The Echo: Field Recordings from Earlsfort Terrace’, due for release on the Ergodos label later this year. The eight-track concept compilation album, ‘In The Echo’ was curated and produced by drummer and multi-instrumentalist Ross Turner.

Recorded in various locations in the historic National Concert Hall building in Earlsfort Terrace, Dublin – ranging from old lecture theatres to dis-used stairwells, to a former morgue – this record features collaborations between Irish musicians across an athletic span of musical traditions, including:

‘Empire One’ by Seán MacErlaine & Katie Kim was one of the first collaborations recorded. “It really set the tone for the rest of the album,” says the album’s curator/producer Ross Turner. “It captures the unique sound of the building beautifully and the sparse arrangement allowed for the space to become a part of the recording.

Katie sang at an upright piano that was located in a room at one end of the second-floor corridor. We kept the door open to enhance the blend of sounds, with Seán situated at the top of a stairwell at the other end of the corridor, maximizing the dynamic between the two performers and the building.”

Katie Kim adds: “I remember the recording of this very vividly, as I think it was my first time wandering the back hallways of the unseen National Concert Hall. The acoustics were beautiful, and the walls were painted this very muted dusty pink and it all seemed a little abandoned. It was visually inspiring straight away.

It’s quite a solitary song and Seán’s response is perfect. It almost sounds like a conversation to me, maybe because we were doing it all in real-time. I could hear Seán like some dreamy memory down the hall – while I sat alone at the piano, facing the wall. It may seem like a love song on sight, but in fact, it isn’t. The unravelling of his musical dialogue feeds that ambiguity.”

“There’s always a heavy shroud of mystery in her songs”, says Seán MacErlaine, who plays bass clarinet on the track. “Katie’s voice is usually heard through lush reverbs and amidst soundscapes, but on this recording, we hear the voice right up front, close with pared-back piano.

Ironically enough, I’m playing into a huge natural reverb of the old empty marble staircase in a dusty end of the NCH just down the corridor. And so, in a way I’m occupying that mystery space while the song unfolds.”

‘Empire One’ by Katie Kim and Seán Mac Erlaine is out now via Ergodos [Thursday 8th April 2021].