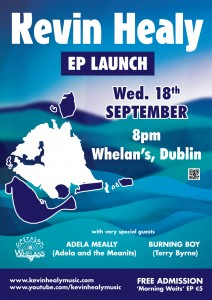 Kevin Healy is set to release his debut ‘Morning Waits’ EP this week, with the launch gig taking place in Whelans, Dublin on Sept 18th.

Chart appearances, radio sessions, festivals and a sonata have all featured in just a short time for newcomer Kevin Healy. His catalogue of original songs highlight his accomplished guitar playing and vocal style.

·He featured on RTE Raidio Na Gaeltachta’s An Seisiun Acustach in a one hour programme dedicated to him and his music.

·He has played at various festivals nationwide