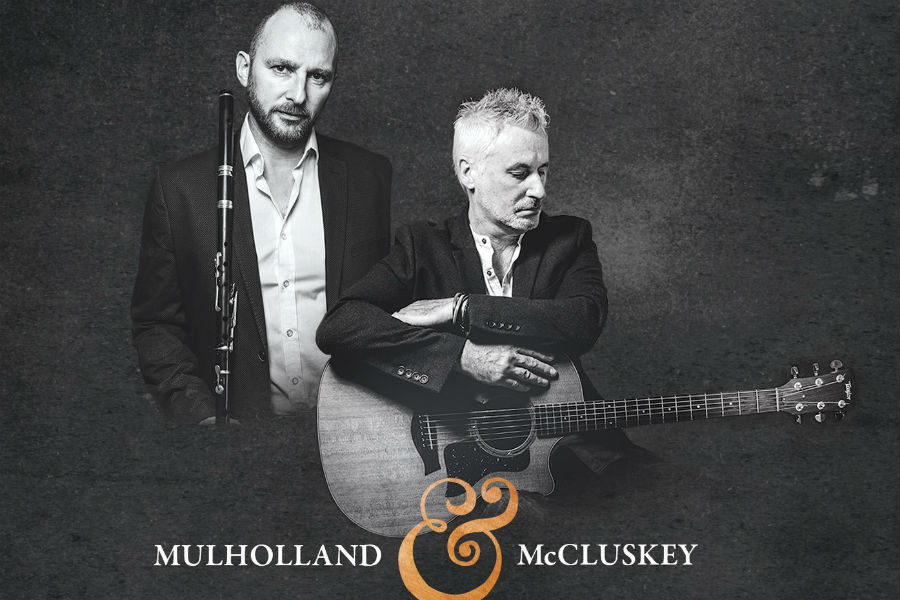 Brendan Mulholland comes from County Antrim and Micky McCluskey from County Armagh in the north of Ireland. Whilst their roots lie in different musical genres, Brendan hailing from a traditional Irish musical background and Micky growing up in the world of rock and pop, their paths crossed many years ago at a local regular music seisiún in Clenaghan’s Bar just outside Glenavy in County Antrim. It was apparent from the outset their music gelled and coalesced, drawing inspiration from each other’s styles and collaborating to produce some new and innovative sounds whilst lending their unique approach to the pure traditional tunes. They have been playing together for almost 20 years now, collaborating with leading artists locally, nationally and internationally. Brittany has been a particularly favourite place to play and visit for them. Over the years they have written tunes individually and more recently as a ‘duo’. Their debut recording as a newly established act, ‘Mulholland McCluskey’ has just been released.

Brendan Mulholland is widely regarded as one of the finest exponents of traditional Irish flute playing in Ireland today. He is in constant demand both at home and abroad for his flute concerts, workshops and lectures. Brendan has featured on several studio albums including ‘Tuned Up’ with Brendan Hendry & Paul McSherry, Mary Dillon’s ‘North’ and he has performed throughout Europe and the USA with artists such as Music in the Glen, Gráinne Holland, Réalta, John Carty and Bríd Harper. His first solo recording ‘Jean’s Hill’, released in 2012, was met with much critical acclaim and his trio act Music in the Glen with Conor Lamb and Deirdre Galway have also received widespread recognition for their debut album which was released in 2018. Micky McCluskey has been playing Guitar and Bouzouki for more years than he cares to remember. He has featured on albums for Artists such as Réalta and Grainne Holland to name a few. He has performed throughout Europe and the USA with many artists including Ben & Tommy Sands, Phil Coulter, Gráinne Holland, Réalta & Bríd Harper.