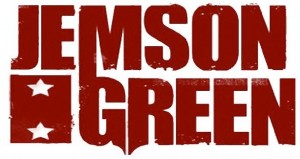 ‘My Only Disease’ and ‘ Who Am I ‘ are the first releases of 2013 by Dublin-based hard rockers Jemson Green.

Recording in Electra Studios, these are the first releases by the band since April 2012. Reflecting the newly found solidity of the band and début recordings with guitarist Conor Dempsey ‘My Only Disease’ and ‘Who Am I’ are as hard-hitting and intense songs as you will hear all year.

This release reaffirms Jemson Green as a strong contender in Irish unsigned music. They are back stronger and more powerful than ever before. With an upcoming album now highly anticipated by fans worldwide, these brand new tracks are just a taste of what’s to come.

‘The only time I felt devastated during this song was when I realised I hadn’t got long hair and could not headbang properly to its exhilarating, guitar squealing, riff rocking, symbol crashing brilliance…5/6’

‘Our influences have come together to form a style of music each member is proud of and proud to be a part of.’

This year is set to be a journey of incredible momentum for Jemson Green. Having already performed at Comic Relief Does Dublin (alongside Bipolar Empire, Walking on Cars, The Enemies, Keywest and Paddy Casey), a support performance for KERBDOG in Galway’s Roisin Dubh as well as their first UK appearance in London this April and a spot with MRU Live on May 9th, they are a force to be reckoned with.

With these two tracks from their upcoming album already fit for release, you can be sure that 2013 has much to offer for this dynamic Irish rock band. This first single will capture every sense and leave you crying for more.