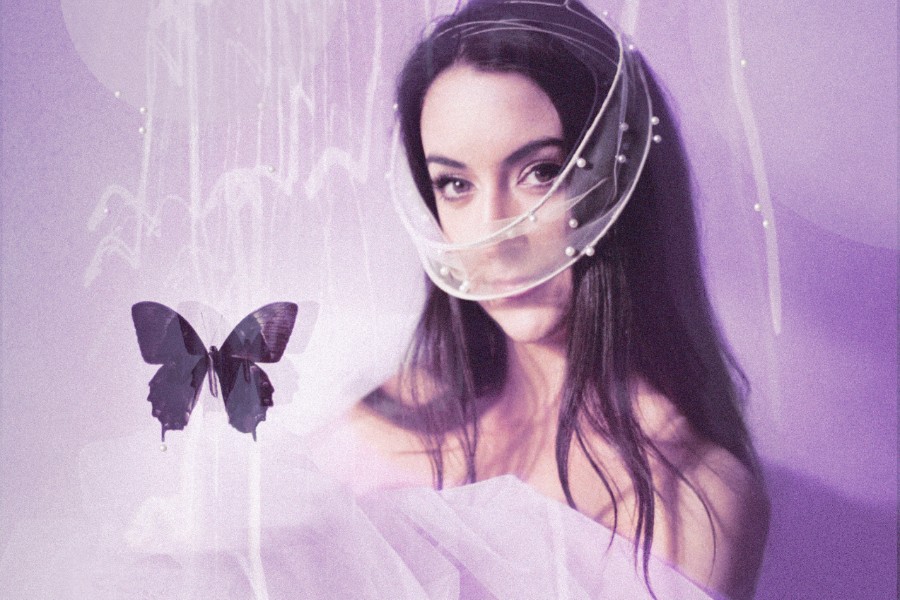 ‘Changeling’ is the new experimental chamber-pop single from sfiiinx, the Irish vocalist and composer Síobhra Quinlan. sfiiinx’s compositions are rooted in art-song, mythology and surrealism.

‘Changeling’ is the second single to be released from sfiiinx’s forthcoming LP song-cycle ‘The Magma Chamber.’

An enchanting and magnetic performer, Síobhra’s work invites the listener into a bewitching realm. Recent sfiiinx performances include two Culture Ireland funded US concerts at the AIHS (NYC) & Pro Arts Gallery (Oakland, California) MusicTown with Glasshouse at The Chocolate Factory, Thursday Lates at The National Gallery of Ireland, and The Irish Arts & Writer’s Festival at The Carriage House Theatre (Los Gatos, California). Recent performances also include a bespoke recital curated for the launch of the Franco-Irish Literary Festival at the Centre Culturel Irlandais (Paris), alongside Colm Mac Con Iomaire as part of Other Voices Courage, and as part of TED Countdown from Sundlaugin Studios (Iceland).

The accompanying shoot for ‘Changeling’ was created in collaboration with Miriam Kaczor.

The music of sfiiinx is informed by a rigorous grounding in classical music. Síobhra graduated from Trinity College Dublin in October 2014 with a BA in Music, majoring in composition under Donnacha Dennehy and Evangelia Rigaki. She began studying classical singing with Veronica Dunne in 2010, continuing her studies part-time at the Royal Irish Academy of Music under Imelda Drumm and Sylvia O’Brien. During this time, Síobhra was also involved with Trinity Orchestra as both a classical and a pop vocalist, performing at Electric Picnic, Forbidden Fruit, Christchurch Cathedral and St. Leonard’s Church, London.

Prior to her post-graduate studies, Síobhra began to perform her compositional work with the Irish Composers Collective in Project Arts Theatre and The National Concert Hall, and internationally as part of DaDa in Berlin Festival at ACUD Theatre, Glogauair, Intitut für alles Mögliche, Waschhaus, Potsdam, and The Rag Factory, London.

Síobhra then returned to undertake an M. Phil in Music Composition at TCD in 2016/2017, and researched and revived the forgotten works of female singer-composers from 17C Italy which she performed at The National Gallery of Ireland with David Adams, and at The National Concert Hall as part of International Women’s Day with Solomiya Maksymiv in 2018. In 2017/2018, Síobhra was a participant on the Female Conductor Programme at The National Concert Hall, and a mentee on the Irish Composers Collective Vocal Mentorship Programme with Michelle O’Rourke.

In addition to her musical output, Síobhra is a creative producer and curator. Síobhra is currently a co-curator as part of Ireland’s Edge – a multidisciplinary event series that makes up a distinctive strand of Other Voices, South Wind Blows. Among her work for Ireland’s Edge, Síobhra has co-curated and co-produced Virtual Crash – a collaboration between Crash Ensemble, Technologist Guillaume Auvray and Camille Donegan of VR Ireland, as part of Ireland’s Edge, Dingle, 2019. As part of Ireland’s Edge at Dingle 2020, Síobhra curated and moderated a conversation exploring transhumanism with author Mark O’Connell and theatre-maker Bush Moukarzel. Síobhra’s work for South Wind Blows also includes ANAM – a multidisciplinary festival, created by Other Voices and DCU, and the Other Voices Creative Education Series.

Other recent creative producing work includes This Land  at The National Concert Hall Dublin and The Civic Theatre – a collaborative and integrative theatre piece, involving Candlelit Tales, Raymond Keane, Farah Elle and emerging Artists who are currently seeking asylum as part of St. Patrick’s Festival 2019. Síobhra is currently creative producer of Nick Roth’s opera Xenia, a wildly anarchic exploration of the notion of hospitality. Following on from development performances of Xenia for Contemporary Music Centre as part of Bealtaine Festival 2018 & 2019, and Culture Night 2018, the opera is currently in development. Síobhra was also producer of Opera Theatre Company’s Opera Hub.