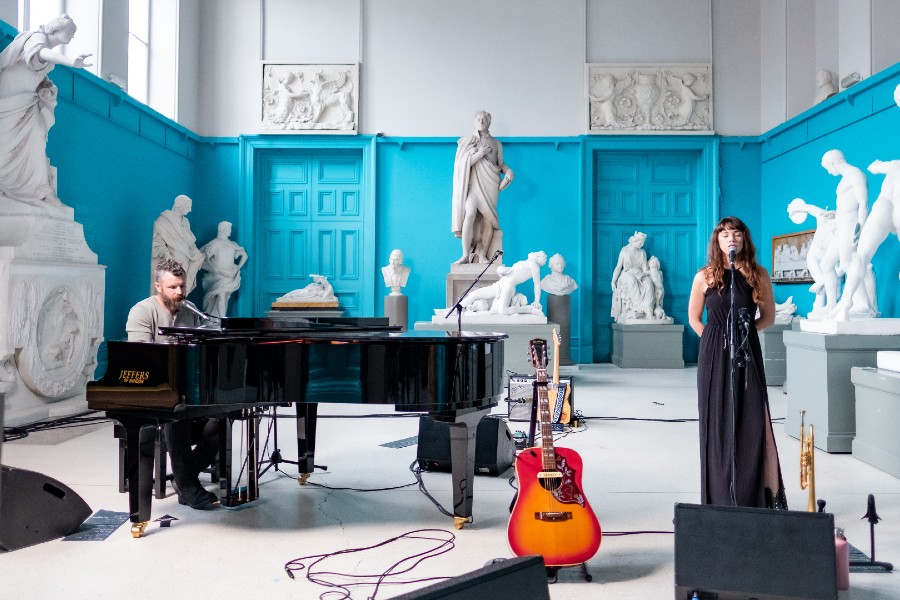 After the success of their ‘Courage’ series, Other Voices is set to release a trio of songs from Mick Flannery and Susan O’Neill’s mesmerising live performance.

Recorded at the Crawford Art Gallery, Cork in July 2020, the brand new three-track EP will feature two Mick Flannery originals (‘I’ll Be Out Her’e and ‘Must Be More’) as well as a cover of ‘Angel From Montgomery’ by country-folk pioneer John Prine.

Their ‘Courage’ performance was a highlight of 2020 for the pair, who have been working on a full album of duets due out later in 2021. Ahead of the duet album release, this special ‘Courage’ recording will be released on streaming platforms on Friday 9th April.

This will be the first in a series of ‘Courage’ music releases with more EP’s and a compilation album scheduled for later this year.

You can presave the EP now: https://smarturl.it/ovcourage-mick-susan

Last December the pair came together again to perform as part of Other Voices Series 19 which is available to watch now on the RTÉ Player: https://bit.ly/3w4ciLV

“Really glad to be a part of this Other Voices E.P with Mick. Good craic was had making it and what a joy it was singing in the Crawford Art Gallery.”

“Very happy to be included in this EP. I’m very grateful to have had the chance to work with everyone involved.”

“Mick Flannery and Susan O Neill write wonderful  songs of love loss and longing and for Other Voices Courage they performed them with passion in the wonderful Crawford Gallery in the heart of Cork City. On that evening they as a nod of recognition and thanks to the late John Prine sang his great song Angel From Montgomery….It was a precious gift.

Make me an angel that flies from Montgomery

Make me a poster of an old rodeo

Just give me one thing that I can hold on to

To believe in this living is just a hard way to go.”