Forget the Eurovision, come to the Seven Oaks Hotel this Saturday night, February 25th for the Pan Celtic Song Contest where eighteen original songs will be vying for the top prize of €1,000 and the honour of representing Ireland at the International event in Carlow in April.

Once again, and for the sixth year running, Carlow has the honour of hosting the gala final. The 18 songs shortlisted from over 40 entries will feature participants from across the country including counties Cork, Kerry, Galway, Dublin, Clare, Westmeath, Laois, Kildare and Carlow. The Carlow entries were penned by Mary Griffin, Tadhg Ó Grifín and Eva Kavanagh.

Prizes will include €100 for 3rd place, €200 for 2nd place with the composer of the winning song receiving a cash prize of €1,000. The song will represent Ireland at the Pan Celtic International Song Contest when the festival returns to Carlow in April where it will be up against entries from the other participating Celtic nations of Wales, Scotland, Brittany, Cornwall and The Isle of Man.

A great occasion not to be missed on Saturday night in the Seven Oaks Hotel, Carlow. A packed audience is expected for the event and tickets cost just €10. Doors open at 7.30pm and the show begins at 8pm. Tickets are available on the door on the night. A raffle will take place during the interval with a cash prize of €100 compliments of Dan Morrissey & Co up for grabs as well as a Seven Oaks Hotel voucher and a Carlow Food hamper. 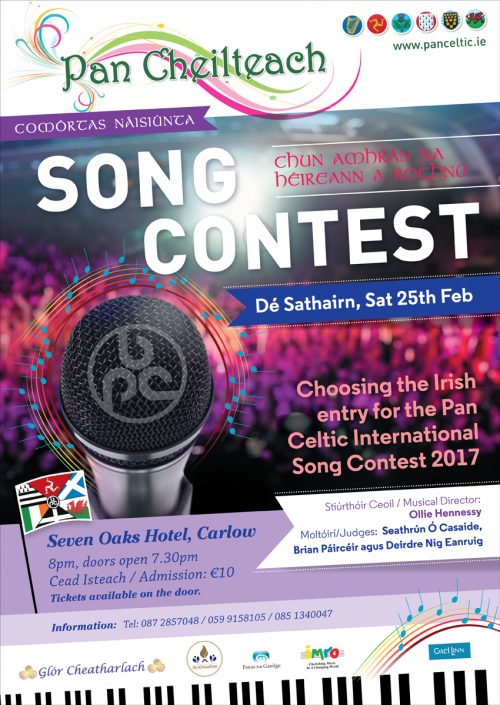