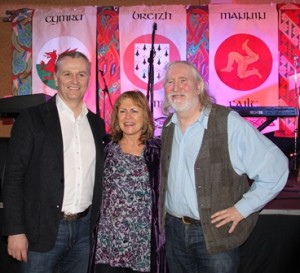 The Inishowen musician/artist Seoirse Ó Dochartaigh and writer/Irish language enthusiast Áine Durkin from Buncrana have had their song, “Le Do Thaobh”, chosen to represent Ireland in the Pan Celtic Song Contest in Carlow in April. Last Thursday evening in the Seven Oaks Hotel in Carlow, they won the First Prize of €1000 in the Irish heat of the contest with Áine’s lyrics set to original music by Seoirse.

On the stage that night there were performances by 20 entrants, shortlisted from 55, many of the songs in very elaborate accompaniment, including, keyboards, percussion, harps, bass guitars and backing vocals, provided by the contestants themselves. However, Seoirse, who lives at KinnegoeBay in north Inishowen, decided to sing the song solo with the minimal amount of accompaniment using his own Spanish guitar in a classical picking style. The adjudicators, who included the well-known Cork singer Seán Ó Sé, were evidently impressed enough to award Seoirse and Áine First Prize.

Áine Durkin is originally from Connemara, but has been resident in Buncrana since her marriage to Brian O’Sullivan in 1980. The lyrics of the song deal with the tragic death of her sister, Ciara Durkin, who died in Afghanistan in 2007. Áine wrote the words down, shortly after Ciara’s first memorial, as she sat in the half-built kitchen of her new house in Inis Eoghain, on a beautiful Autumnal day. As she watched the river and the beauty of nature outside, trying to make sense of life, and of Ciara’s death, in particular, the lyrics first came to her in the form of a song. A few years later, during the summer of 2012, upon hearing Seoirse performing in The Red Door in Fahan, Áine knew that she had found the right singer for her lyrics, and one who, as events unfolded, would, in expressing the message musically, give the song its life.

The simplicity and intimacy of Seoirse’s melody and performance very effectively capture the sadness of Áine’s lyrics which are well-rooted in the Irish tradition of the caoineadh, a lament for the loss of such a lovely person.  The song also depicts some other losses and sadnesses within society itself.  There was stillness in the hall as Seoirse performed the song in Carlow. It was generally described as “a very emotionally charged performance”.

Seoirse is presently working on the release of a new album called “Windmills of the Mind” using local Inishowen musicians of the calibre of the Henry Girls, Aiden McLoughlin and Laurence Doherty, recorded entirely in Inishowen. The songs range from Leonard Cohen and Dylan to traditional songs from Donegal. The Henry Girls are involved in every one of this generous offering of 18 tracks (really a double album pressed onto a single disc).  Seoirse’s daughter, Neassa, also sings on two of the songs. The CD is due for release in the next few weeks.

Seoirse and Aine’s song will be performed again in Carlow on 4 April 2013 when it competes with five other entries from Scotland, Wales, Isle of Man, Cornwall and Brittany.  Follow them up to Carlow!

Information on the events of the International Pan Celtic festival can be found at: www.panceltic.ie