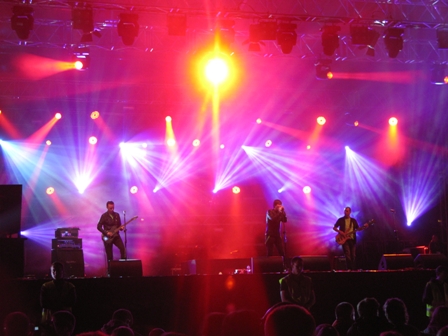 The prize was an all expenses trip to Bialystok, Poland to play at Juwenalia 2011 Rock Festival on May 20th. The rock festival was attended by over 20,000 people and headliners were German rock stars Guano Apes.
Protobaby took to the stage after Guano Apes and played a high energy set in front of thousands of Polish rock fans. The gig was a huge success and the band have been inundated with requests to return with many fans citing their set as the best of the 3 days of Juwenalia Bialystok 2011. The band also managed to perform at the Odeon Jazz club in Bialystok and went down a storm. Plans are in motion to return to Poland in the near future.
Protobaby will be playing 2 more live dates in Ireland before hitting the studio to record their debut album with producer Owen Lewis. These will be the 10th June – Dolans Warehouse, Limerick and 9th July Crane Lane Theatre in Cork.
State of Affairs is available on itunes.
www.facebook.com/protobaby
www.breakingtunes.com/protobaby
www.youtube.com/ProtobabyVids
www.protobaby.com
Spotlight