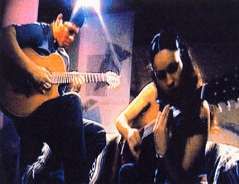 Mexican virtuoso acoustic guitar duo Rodrigo y Gabriela release their third album on February 17th on Rubyworks Records, and return to Ireland with a string of live dates to support the release.

â€œRodrigo y Gabrielaâ€ is produced by John Leckie (Muse, Radiohead, My Morning Jacket) and the artistes themselves. It was recorded in the UK in the late summer of 2005, and features nine new tracks â€“ seven Rod & Gab originals and two covers â€“ Metallica&acutes â€œOrionâ€ and Led Zeppelin&acutes â€œStairway To Heavenâ€. All the instrumentation on the album comes from Rodrigo y Gabriela&acutes guitars, with the exception of guest gypsy violinist Roby Lakatos, who contributes a blistering solo to â€œIxtapaâ€.

The album will be initially released as a limited edition CD with bonus DVD package; the DVD includes exclusive interviews, bonus live tracks, a guitar tutorial from Rod & Gab and a Mexico picture gallery.

A single â€“ â€œTamacunâ€ â€“ will precede the album, and will be released on very limited edition 7â€ â€˜dinked&acute vinyl plus hand finished sleeve and download on February 3rd.

Fresh from touring around the UK and Europe as special guests of David Gray; Rodrigo y Gabriela will bring their incendiary live show back to Ireland with the following dates in February: