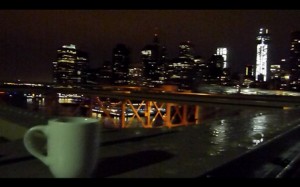 Róisín O have been in touch with fans around the world to help them with the video for their track ‘Tea Song’, which is taken from their debut album ‘The Secret Life of Blue’. Irish expats have sent footage of themselves from the country they’re currently living in drinking a cup of tea for the video; now called the Irish #teaspora!

The band are encouraging their fans to share the Irish #teaspora video with any friends and family they have living abroad.

Róisín explains her thoughts behind the unique video:

“It’s crazy to think that, after growing up in the Celtic Tiger, so many of our close friends are now living and working abroad. That’s why we felt this idea for Tea Song could be cool and a nice way to get back in touch with friends and family we haven’t seen in a while, and at the same time get in touch with fans abroad. And also share our mutual love for tea; it brings us closer as a nation!”

Róisín O, now the name of both the band and its frontwoman, also have some very exciting shows coming up. A week after supporting both Lionel Richie (The O2 – 10th Dec, The Odyssey – 11th Dec) & The Coronas (The O2 – 14th Dec), the band will perform an intimate Christmas show for a very limited audience in the Unitarian Church on St. Stephen’s Green on Thursday, December 20th. They’ll be performing a unique arrangement of the tracks from their debut album, along with a few Christmas classics too.

This will be a once-off performance to celebrate the end of a very enjoyable & busy 2012 with some of their fans.

Róisín O are encouraging their fans to help with putting the show on by selling tickets through the Irish-owned start-up company Gigstarter, self-described as “a revolutionary way to connect artists and audiences. Better deals for fans, higher returns for musicians and a ground breaking way to gauge demand.”

Tickets will go on sale next week, full info from http://www.roisino.com/