Saint Sister and Lisa Hannigan Share ‘The Place That I Work’ 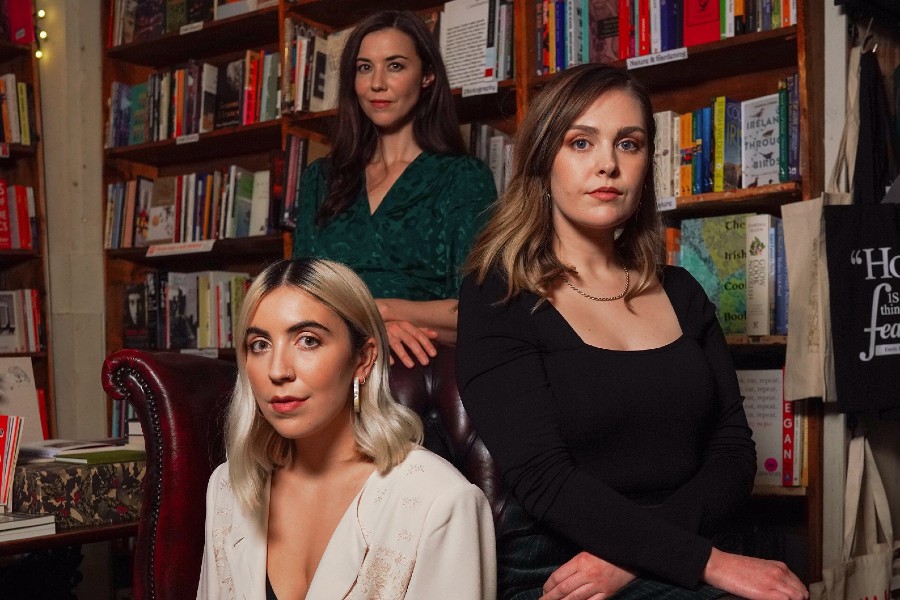 Irish duo Saint Sister—Dublin-based songwriter Morgan MacIntyre and multi-instrumentalist/composer Gemma Doherty—today shared their new single and collaboration with Mercury-nominated songwriter Lisa Hannigan, ‘The Place That I Work‘, alongside its accompanying video, an Algorithm Studios production, directed by Kev Freeney. The song tells the story of a reconciled friendship following a period of estrangement, setting the traditional Irish Ballad form against a bedrock of atmospheric strings, synthesizers, and birdsong.

Contemplating the song’s origin, MacIntyre explains: “I wrote this song while I was working as a Christmas temp in Dublin’s oldest book shop, Hodges Figgis. One day a friend, who I hadn’t seen since we had a misunderstanding, came in and caught me completely off guard. I was, all at once, angry that we hadn’t talked for months and that they had chosen now, to come to where I worked to make peace, but also undeniably relieved and happy to see them, to know we were still friends.”

The arrangement of ‘The Place That I Work’ features a distinctive blend of interlocking three-part vocal harmony. Doherty, who arranged the piece, details the process: “After a few attempts at an arrangement, it seemed like it should be quite free and driven by the vocals, possibly a cappella. We’re so used to singing as a duo and creating vocal harmony with two voices, but with three voices you can find a real sense of completion within the chords. When we started thinking of it in three-parts, the first voice that came to mind was Lisa’s.”

Saint Sister first met Lisa Hannigan in 2016 at renowned Irish music festival Other Voices. Bonding over a mutual respect for each other’s work, they quickly developed a rapport, and months later Hannigan invited them to join her 2017 European tour. This was a dream experience for MacIntyre and Doherty, who opened on more than 15 dates and joined Hannigan on stage each night to sing backing vocals. When the time came for Saint Sister to record their second album, there was only one voice they had in mind for the song.

Speaking of the experience, Hannigan says: “I’ve been a fan of Saint Sister’s work since they started out and was thrilled to have them come on tour with me in 2017 so I could hear them play every night, and they also sang beautiful harmonies on some of my songs. So when they sent me this gorgeous tune I was so glad to be a part of it and it was a privilege to see how they arrange their songs up close. I love how the melody weaves between the voices, how the harmonies change and evolve over the course of the song, how the imagery feels so universal and specific at the same time.”

The trio first performed this song for “The Ruby Sessions At Home” series back in March. “It felt very special then to sing together when we were all so far apart, and preparing and recording the show was such a welcome distraction during the first lockdown,” explain MacIntyre and Doherty. “As with every Ruby Sessions, the gig was in aid of Dublin Simon Community. We wanted to bring some of what made that night so important for us to this video. A lot of us have temporarily lost the place that we work but too many people live without a home, without a safe space at all. It’s a mad old time. Mind yourselves and each other, and if you can please donate to Dublin Simon Community. We have commissioned a limited edition print, inspired by the lyrics and designed by Joshua Fanning and will be donating a third of the proceeds to the charity.”

‘The Place That I Work’ is Saint Sister’s second single this year, following the release of ‘Dynamite‘ in March. Both follow the duo’s 2018 debut album, ‘Shape Of Silence‘, which earned them attention from outlets including NPR Music (watch their Tiny Desk Concert), Billboard, Earmilk, and The Irish Times, among others. In addition, the album was nominated for the Choice Music Prize and the Northern Irish Music Prize. The band have toured extensively over the past five years, both as a headline act and opening for others such as Hozier, Keane, and O Wonder, and have performed at festivals such as Glastonbury, SXSW, and Eurosonic.

Built around mesmerizing close-knit vocal harmonies, electro-acoustic harp and synthesizers, Saint Sister have been sonically likened to Enya and Cocteau Twins. The pair first met in 2014 in Dublin, where they moved to attend College from the north of Ireland. Doherty studied music composition with aspirations of becoming a film composer, but later returned to her first instrument, the harp, and began creating self-contained soundscapes around it—inspired by composers like Steve Reich. MacIntyre, meanwhile, had been a songwriter since her childhood obsession with lyrics, and cut her teeth on Belfast’s open mic circuit before releasing music as a solo artist in college to early recognition from Snow Patrol’s Gary Lightbody and Joan Armatrading. Frustrated by the limitations of working alone, she went in search of a collaborator; aware of Doherty through mutual friends, the two met over coffee and it quickly became apparent that they were hoping to build something similar. Between MacIntyre’s lyrics and Doherty’s soundscapes, their voices met right in the middle.