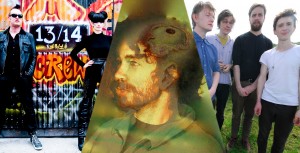 The Certain Three Tour returns for its fourth annual outing this January and February in venues throughout Ireland.

Curated by Irish-based booking agency Word of Mouth, the shows will feature a triple bill of three very different acts with an alternating running order for each show. This year’s acts have been announced as electro-pop duo Nanu Nanu, lo-fi shoegazer Si Schroeder and the post-punk of Trumpets of Jericho. RTÉ 2FM will also be featuring live sessions from all the acts on Dave Fanning and Dan Hegarty’s shows on 15th and 16th January.

Previous tours have featured Katie Kim, O Emperor, We Cut Corners, The Lost Brothers and Alessi’s Ark, amongst others.

The Certain Three Tour Dates are:

NANU NANU are an Alien-Pop duo based in Dublin. Members Mirrorman and Glitterface use analog and modular synthesizers teamed with a strong foundation of heavy beats and lush, otherworldly vocal processing to create their exciting and unique ‘Alien-Pop’ sound.

They have just finished their debut album, which will be released in early 2013 on Flaming June. Their debut single will be Pocket of Gold. It has been mixed by producer Rob Kirwan; the man who mixed PJ Harvey’s Mercury Prize winning album Let England Shake.

SI SCHROEDER is a Dublin-based musician who mixes his voice with guitars, samples, acoustic instruments, beats and live drums to create haunting and uplifting melodic songs exploring the darker side of the human condition. A layered approach to composition and production results in dense, textured blends of synthetic and organic sounds, over which Si’s warm, soothing voice unravels stories of chaos and destruction.

His debut album, the critically acclaimed Choice Music Prize nominated Coping Mechanisms (2006), was the Irish Times’ record of the week, Foggy Notions’ album of the year, and is in the Hot Press list of top Irish albums of all time.

His second album is due for release in 2013.

TRUMPETS OF JERICHO are a folk-tinged post-punk band from Cork, formed in 2010.

After two years of creating some semblance of a sound that they can call ‘their own’, the group finally decided to record their debut Songs Like an Alum Ut Its Nor Really, garnering praise and indifference in equal measure. Their energetic live shows have built them a strong and loyal following in the south of Ireland (i.e. Cork) and they recently opened for The Fall, which is pretty cool.