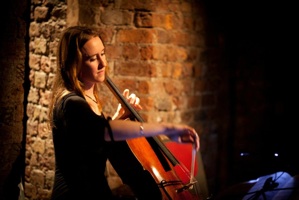 All 3 composers are represented by the Contemporary Music Centre and Enda Bates will be present at the salon to talk about his work. A launch, hosted by the Contemporary Music Centre, of a digital download of Enda Bates’s Duo for Violin and Cello with Tape, along with an electronic piece called Flock, will take place after the salon. The digital download will become available via bandcamp after the launch.     This digital download launch will be followed by the next New Sound Worlds concert, which features the RTÉ Vanbrugh Quartet and takes place in the Kevin Barry Room, 8.30pm, 25 April 2012. Truly a night of new music in the NCH!

Cliodhna Ryan enjoys a diverse and varied career as a violinist. As a founding member of the Rothko String Trio, she made her London debut to critical acclaim at the Purcell Room in 2005. Cliodhna has been a guest artist at the Shannon International Music Festival and the Cutting Edge and Meanwood Music Series in London. In addition to her work with the Rothko Trio, she has performed with the Vanbrugh String Quartet, Birmingham Contemporary Music Group, Chroma and Crash Ensemble. As a member of the Irish Chamber Orchestra she has played alongside such great artists as Richard Tognetti, Anthony Marwood and Pekka Kuuisisto. She performs regularly with the Northern Sinfonia, London Philharmonic Orchestra and City of Birmingham Symphony Orchestra. She is frequently engaged as principal violinist with the RTÉ Concert Orchestra and the Endellion Orchestra amongst others. Her education has taken her from the Royal Academy of Music in London to Dallas, as a Fulbright Scholar. More recently, she has been an artist-in-residence at the Banff Centre for the Arts, Canada. These residencies were supported by the Arts Council/An Chomhairle Ealaíon and The Banff Centre for the Arts.

Kate Ellis is a dedicated soloist and chamber musician, as passionate about World Music as she is about New Music. Kate is cellist with the Crash Ensemble and performs and tours with Gavin Friday, the Karan Casey band and Yurodny. She is also a core member of the ensemble Tarab. As a soloist Kate has commissioned and premiered many new works for solo cello. Kate is a prize-winning graduate of the Royal Irish Academy of Music and studied at the Purcell School and junior department of the Royal College of Music in London. In July 2011 Kate became musician in residence at the Cork Opera House working as co-curator of the Reich Effect, a festival marking the 75th year of Pulitzer Prize winner Steve Reich. She is continuing her residency throughout 2012 with a series of solo concerts and collaborations with other Irish and International musicians. www.kateelliscello.com

Together, Cliodhna Ryan and Kate Ellis are co-curators of the ground breaking monthly music salon, ‘Kaleidoscope’. Founded in 2009, Kaleidoscope Night has been described by the Irish Times as “one of those life-saving, spirit-lifting, pioneering Cultural Ventures we keep hearing about”. Kaleidoscope brings a vibrant, dynamic musical experience to audiences and performers. Innovative and imaginative programming offers a diverse range of music from ancient to contemporary and experimental in a relaxed, intimate and beautiful setting. www.kaleidoscopenight.com

The CMC new music::new Ireland salon series aims to encourage newcomers and enthusiasts alike to engage with the music of Irish composers. Each performance takes place in an informal atmosphere with dialogue encouraged between composers, performers and audience. This is the Centre’s nineth series and salons will take place across the year on the last Wednesday of each month, apart from the summer months (June, July and August).