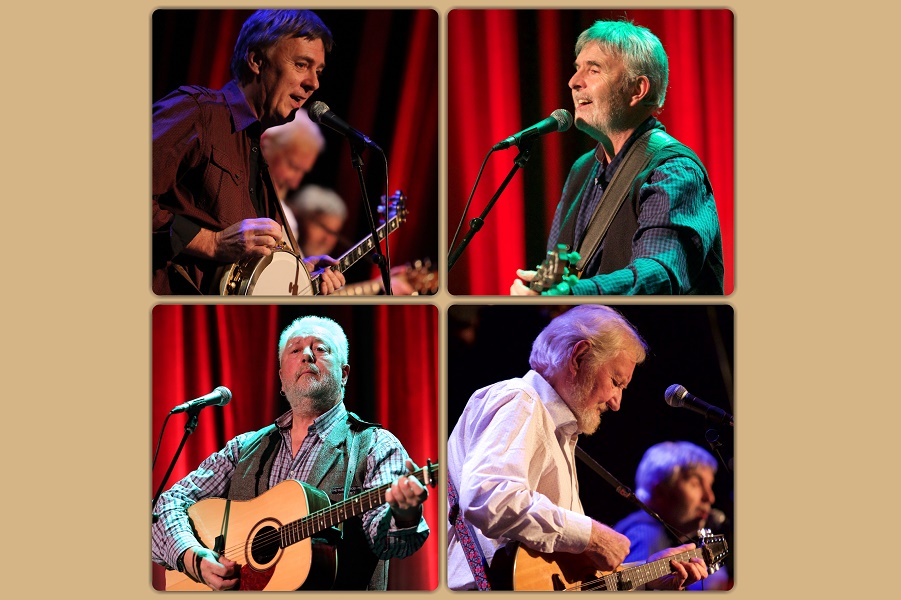 Following the sudden death of founding member Barney McKenna in 2012 and John Sheahans’ decision to retire it was agreed that The Dubliners, as a touring band, would come to an end and THE DUBLIN LEGENDS were born.

THE DUBLIN LEGENDS, Sean Cannon, Paul Watchorn, Gerry O’Connor & Shay Kavanagh, have over 100 years of performing experience between them and Sean was the lead singer with The Dubliners for over 30 of them! They will, of course, continue to play all the classic songs and ballads known the world over; ‘Whiskey In The Jar’, ‘Dirty Old Town’, ‘The Wild Rover’, S’even Drunken Nights’, ‘The Rare Auld Times’, ‘Molly Malone’, ‘The Irish Rover’, ‘Black Velvet Band’ & many more.

In 2017 guitarist and founder, Eamonn Campbell, passed away while they were on tour in Holland. Even though he had been in poor health it was still a massive shock. The lads asked an old friend, Shay Kavanagh, if he would like to come on the road with them and, thankfully, Shay readily agreed. Shay is a stalwart of the Irish Folk Music scene. He was a founding member of General Humbert with the great Mary Black and has played with The Dublin City Ramblers for many years.

It was Eamonn’s wish that the band continue touring and finish off recording the album they had been working on. This is a follow-up to ‘The Dublin Sessions’ which featured 16 newly recorded tracks and included some old favourites & classics that the lads wanted to get down on disc…’The Leaving of Liverpool’, ‘Schooldays Over’, ‘Pub With No Beer’, ‘Rambling Rover’, ‘Hand Me Down My Bible’ and some scorching banjo tunes from Gerry O’Connor.

In the past seven years the band have continued the legacy of The Dubliners by travelling far and wide playing concerts to a whole new generation of Irish music fans. They have wowed audiences in Iceland, Norway, Finland, The Faroe Islands, Sweden, Holland, Belgium, France, Italy, Spain, Austria, and Switzerland and all over England, Scotland & Wales.

Make sure you join the boys for at their now annual Christmas Show at Dublin’s Vicar St on Saturday 28th Dec.

Tickets €36.50 incl fees on sale Fri 29th March at 9.00am from Ticketmaster Nationwide.