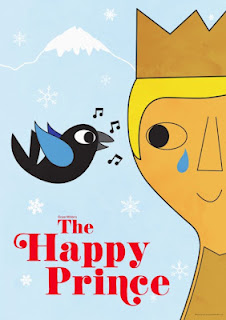 For the past year, composer Vincent Kennedy and playwright and actor Little John Nee, have been collaborating on an adaptation of Oscar Wilde’s story The Happy Prince. This beautiful music, storytelling and theatre work has been commissioned by Donegal County Council Public Art. During the process Vincent and Little John spent time working on the music and script in the Tyrone Guthrie Centre and other places.  The result of this collaboration is an exquisite theatre presentation in which Little John will both narrate and act while Vincent conducts the Donegal Youth Orchestra and Donegal Youth Choir in the 24 music pieces and songs that make up the show.  Vincent, who was a professional Trumpet player before establishing himself as a composer, will also perform a solo number during the show.  The show is directed by Raymond Keane. This production of The Happy Prince is 55 minutes long and explores the timeless themes of love, friendship and compassion in a magical way.

The Happy Prince is one of the key events of ‘Donegal Gathering 2012 ‘.  See http://donegalgathering2012.blogspot.com/p/april-2012.html

The first performance of The Happy Prince will be in An Grianan Theatre, Letterkenny (www.angrianan.com) on Saturday April 14th at 7pm and Sunday 15th April at 3pm.  Further performances take place on Saturday 21st April at 3pm and 7pm in The Abbey Centre, Ballyshannon (www.abbeycentre.ie ).