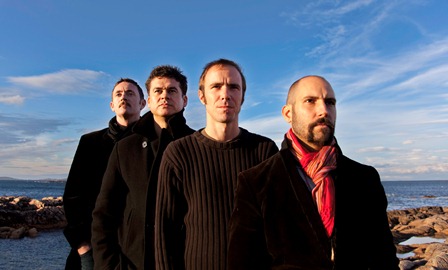 Track Dogs is the new band name for Garrett Wall Band, the acoustic four piece based in Madrid.

The band takes its name from the maintenance teams working the subway tracks in New York City. These teams have to look out for each other and are a closely-knit group much like the band of four expats living in Spain who came together in 2007 to make their unique brand of folk-pop. Eschewing the typical band line-up they have opted for Cajón (flamenco box drum) instead of drums and trumpet in place of electric guitar. With acoustic guitar, bass and four vocals the band are constantly evolving both as a live act and studio band as evidenced on their new album, Track Dogs.

Made up of two Irishmen; Garrett Wall (Vocals/Guitar) & Dave Mooney (Bass/Vocals), Englishman Howard Brown (Trumpet/Vocals) and Cleveland, Ohio native Robbie K Jones (Cajón/Banjo) the band have already released two albums under their previous incarnation. Perhaps inspired by the new lease of life given to them as a result of the name change the new material shows the energy and freshness you would expect from a “debut” album combined with the confidence and diversity  you would expect from a band with as many miles under their belt as Track Dogs.

Track Dogs celebrate the launch of their new album with a headline show in Dublin’s Crawdaddy.

Current single ‘Going Through The Motions’ which is currently playlisted on RTE 1 can be downloaded for free from:
http://soundcloud.com/trackdogs/going-through-the-motions-1