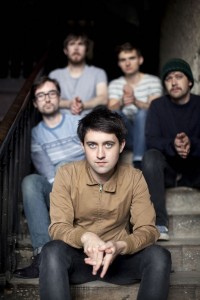 Villagers will play Vicar Street on 17th December with tickets on sale now!

Villagers are set to release “Earthly Pleasure” as the next single from their critically acclaimed Number 1 album, {Awayland}. A compelling fantasy with ‘spiky lyrics, restless rhythms and a lovely melodic chorus’ (the Evening Standard), “Earthly Pleasure” will be available digitally on 23rd August. It follows on from previous singles “The Waves” and “Nothing Arrived”.  {Awayland} is the follow up to the debut Choice Music Prize nominated album Becoming A Jackal.

In March Villagers played two sold-out shows in Dublin’s Olympia Theatre. More recently they have toured in North America and played a standout show at Glastonbury Festival. Earlier this month Conor O’Brien was invited to appear at Beck’s Song Reader Live at The Barbican in London, alongside Jarvis, Franz Ferdinand, Charlotte Gainsbourg and others. Conor performed his own sensitive version of “Old Shanghai” which was hailed as a standout of the evening by The Independent and also performed a duet with Beck on closing song “Do We, We Do”.   Villagers have had a busy summer with appearances at T in the Park, Latitude, Longitude and Pukkelpop Festivals. They will also be appearing at Reading & Leeds this weekend.