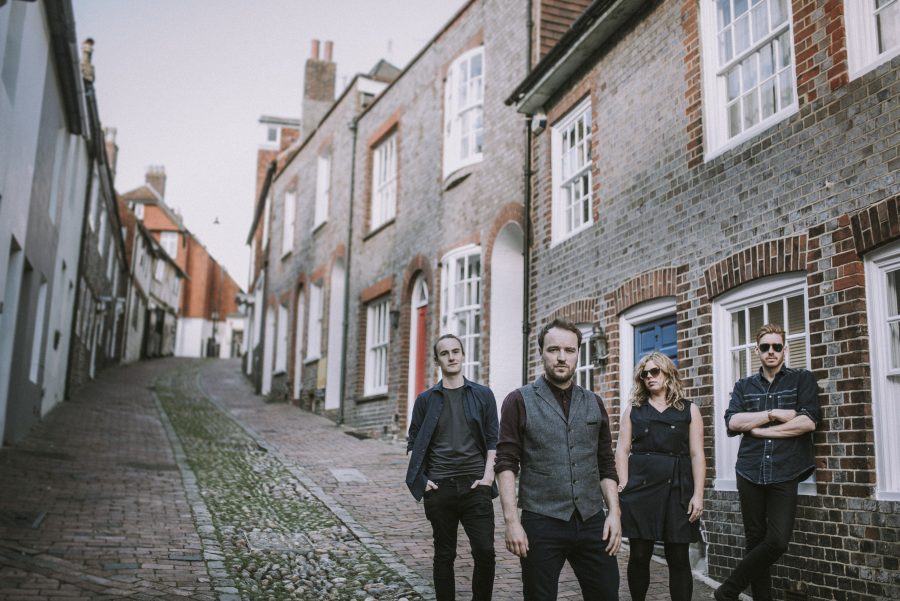 2017 has been a busy year for  Warsaw Radio. After the release of their much-praised (BBC 6 Music, RTÉ Radio) debut single ‘After Eve’ earlier in the Spring,  and  UK and Ireland dates including a main stage slot at Beautiful Days Festival alongside The Levellers & The Waterboys, the group arrive with new single  ‘Whispers’ – a track showcasing the group’s unique sound foregrounded by singer-songwriter and musician Brían McNamara’s baritone vocals and violinist  Nikki Bates’ rich string performances.

McNamara moved to Brighton from Limerick in 2013, and it is a small moment in time in the seaside resort town that sparked the creation of the new song. He explains: “Two friends, a guy and a girl were deep in chat about the guy’s relationship…. the girl kept repeating to the guy “She doesn’t want to be your bore…. just adored”…. from there the song was born”. An observant and attentive depiction of young love, each verse is carried by a sturdy rhythm section and descending melodic line before segueing into an almighty chorus in which McNamara passionately calls the song’s main lyrical refrain.

With an upcoming debut album with Mercury Award-nominated producer Jag Jago (The Maccabees, Florence + The Machine) and live gig dates this coming October, the future is looking bright for the heartfelt and powerful quintet.

‘Whispers’ will be released independently on 27th October, and will be available via Spotify, Apple Music and other streaming platforms. W.R will be announcing their 2018 Irish dates in the coming weeks.