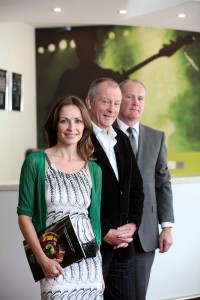 l licensing revenue in 2010 amounted to €38.1 million, a decrease of 5.8% on the previous year. The fall in revenue was anticipated due to a smaller number of live music events taking place and the fall in advertising revenue from independent radio. It followed a particularly strong year in 2009, where overseas and concert revenue reached all time highs.

Commenting on the results, Victor Finn, IMRO CEO, said, “Our results for 2010 were satisfactory, given the current economic conditions which impacted on live music events and advertising revenues. Emphasis was placed on controlling costs and the organisation achieved a 9% saving on the previous year. We remain at the forefront internationally of payment frequency and speed to our members and affiliates.”

“Despite the tough environment that Irish business is operating in, IMRO has a set of very solid results for 2010 which broadly reflects the proactive strategies the organisation has taken in the areas of cost containment, increased market penetration, investment in IT systems and processes to improve overall efficiency. IMRO’s ongoing challenge is to ensure the full protection of our members’ right to be remunerated when their work adds value to business” added Keith Donald, IMRO Chairman.

Victor Finn, IMRO CEO added, “IMRO remains committed to representing a collective voice for music creators in a challenging economic environment and during the continued evolution of the music industry. We are focused on ensuring songwriters and their music publishers receive fair compensation for their creativity, whilst also helping to support up and coming artists.”

On the issue of copyright infringement Mr Finn added; “It is an extremely important time for the creative community, when music and other intellectual property rights are more widely available than ever before. We will continue to work with our partners in the creative industries to underline the important contribution creatives’ make to the Irish economy. We welcome the timely review of copyright announced by Richard Bruton, Minister for Jobs, Enterprise and Innovation recently. This is necessitated by the advances in digital technology that have rendered some of the existing provisions obsolete.”

He continued; “In the digital area it is clear we do not have adequate legislation to protect our songwriters, authors and their publishers. We welcome the separate consultation issued by the same Government in seeking to grant injunctive relief to copyright holders against online intermediaries whose services are used by a third party to infringe copyright. This will ensure the correct transposition of the 2001 EU Copyright Directive.”

“Together with this necessary legislation however, we also believe there must also be co-operation at industry level. This can only be achieved by the ISP and content industries sitting down to roundtable discussions to agree practical measures to ensure that piracy on the internet is minimized. If it is necessary the Department of Jobs, Enterprise and Innovation can facilitate by directing all ISPs to partake in such a process.” Mr Finn added.

“Many of the laudable objectives in the Programme for Government recently published depend entirely on robust copyright foundations and strong enforcement. The ICT sector, now very much our partners in the delivery of copyright works also depend on intellectual property to ensure that investment in software, hardware and patents is protected. Continued spend on research and development is thus assured. An environment where so called fair use exceptions are expanded, creating a light touch copyright regime is not a viable option. We will work with the relevant Departments and the review group established by the Minister in the coming months to deliver a balanced review of our copyright legislation. This will ensure that innovation in the technology sector is encouraged while also providing a fair return for creative endeavours.” He said.

Licensing revenue of €38.1 million was achieved in 2010. This was split across fives areas:

This revenue comprises royalties from RTE, TG4 and independent and television broadcasters. In 2010 this sector generated €7.3 million in revenue, a decline of 5% on the previous year. It represents 19% of IMRO’s total revenues.

Cable and satellite revenue reflects the royalties payable for the cable retransmission of UK terrestrial and satellite channels in Ireland. Revenue at €12.2m, was in line with 2009. The majority of this revenue is distributed to the cable rights holders involved in the rebroadcast of BBC, ITV, and Channel 4 programming on cable networks, with the remainder being distributed to IMRO members and affiliates. This sector represents 32% of IMRO’s total revenues.

Public performance revenue represents the majority of IMRO’s revenue, accounting for 39% of the total in 2010. It reflects royalties arising from the public performance of copyright music in shops, bars, cinemas, hotels, offices, etc, and at large live concerts. In 2010, €14.9 million was generated, a 6% decrease on 2009 due to a lower level of activity and difficult debt collection in this sector compared to the previous year. Notable milestones in 2010 include a focus on increasing market penetration, publication of revised concert and cinema tariffs and a new multistage concert tariff.

2010 marked the first full year in existence of IMRO’s new dedicated International team with a focus on proactively increasing the organisation’s overseas revenues. This sector accounted for €3.3 million in 2010. This revenue arises from the use of IMRO members’ repertoire in other counties and represents 9% of IMRO’s total revenues. In 2010 overseas revenue fell by 25%, reflecting a number of years backed revenue collected in 2009 from France and Spain. Revenue spilt as a percentage of international revenue is as follows:

IMRO is a national organisation that administers the performing right in copyright music in Ireland on behalf of its members – who are songwriters, composers and music publishers – and on behalf of the songwriters, composers and music publishers of the international overseas societies that are affiliated to it. IMRO does not represent the interests of record labels. Their interests in Ireland are administered by Phonographic Performance Ireland (PPI) and their representative trade body is The Irish Recorded Music Association (IRMA). IMRO’s function is to collect and distribute royalties arising from the public performance of copyright works. IMRO is a not-for-profit organisation.

Music users such as broadcasters, venues and businesses must pay for their use of copyright music by way of a blanket licence fee. IMRO collects these monies and distributes them to the songwriters, composers and music publishers who created the songs. The monies earned by copyright owners in this way are known as public performance royalties.

IMRO is also prominently involved in the sponsorship and promotion of music in Ireland. Every year it sponsors a large number of song contests, music festivals, seminars, workshops, research projects and showcase performances. Indeed, IMRO is now synonymous with helping to showcase emerging talent in Ireland.